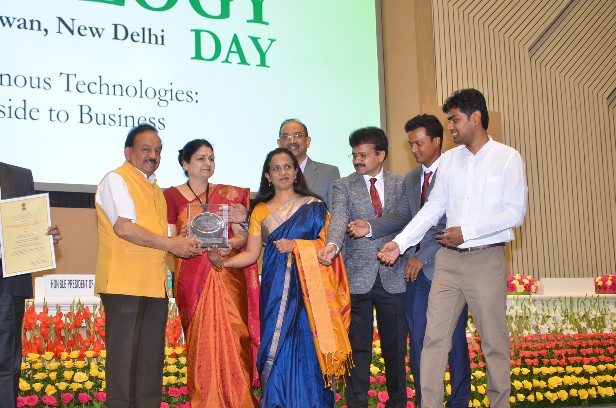 In recognition of the outstanding contribution of The Energy and Resources Institute (TERI) to biotechnology and biological sciences, the Department of Biotechnology (DBT), Ministry of Science and Technology, has selected TERI for its ‘Biotech Product, Process Development and Commercialization Award 2018’. The award was jointly conferred to TERI, the Oil and Natural Gas Corporation (ONGC) and the ONGC Energy Centre (OEC) Trust, by Dr Harsh Vardhan, Union Minister of Science and Technology, Environment, Forest and Climate Change, and Earth Sciences, on the occasion of Technology Day on Friday, May 11.

TERI has been awarded for its in-situ generation of methane from coal bed through microbial intervention that can enhance the production of coal bed methane (CBM). The resource represents a significant portion of the world’s natural gas reserves, and it has been suggested that up to 20 per cent of the world’s natural gas, including CBM, is microbial in origin. However, drilling and maintaining microbial CBM is becoming less economical due to current, relatively low gas prices and competition from shale gas production. In view of the benefits of microbial process for conversion of coal to methane in the CBM wells, TERI has been working on development and demonstration of microbial process for in-situ generation/enhancement of methane from underground coal seams.

TERI, OEC, and ONGC researchers have discovered a way to produce a three to four-fold increase in the amount of methane gas emitted by naturally occurring microbes living in coal seams. TERI, OEC and ONGC formed a partnership on Demonstration of in-situ stimulation and bioaugumentation for methane generation/enhancement from producing CBM wells of Jharia – which is deploying this technology for industrial application of methane production in coal seams gas wells operated by ONGC. TERI has cultured the microbes in the laboratory and created the same condition as found in the coal seams for domestic use. The innovation benefited the environment by extending the lifespan of coal seam gas wells, as well as improving the economics of using woody crops and left-over food as commercial sources of biogas.

Expressing his delight, Dr Ajay Mathur, Director General, TERI, said, “It is an honour for TERI to receive this award for its pioneering work around in-situ generation of methane from coal bed. As we work hard to bring our solutions to the market, awards like these work as positive reinforcements and create an environment of strong support for organisations working across the biotech spectrum.”

Dr Banwari Lal, Senior Director, TERI, expressed his appreciation for DBT for the initiative, which was started in 2001. He also expressed his gratitude to OEC and ONGC for their support and guidance in developing the award-winning technology. “It is in the process of commercialization, which will pave the way for clean energy in the future and eventually reduce dependency on fossil fuels,” he said.

Dr Meeta Lavania, Fellow, TERI, who received the award on behalf of the institution, expressed her immense pleasure at receiving the prestigious national award. “This technology will open up more opportunities/avenues for sustainable and environment-friendly forms of energy in the future,” she said.

‘Biotech Product, Process Development and Commercialization Award’ is an annual award that recognises the outstanding contributions of scientists, innovators and institutions (both in public and private sector) for a new process/product development and commercialization of a technology in the areas of biotechnology and biological sciences, including agriculture, biomedical and environmental sciences. Up to five awards are given every year.

Hundreds of Trees Planted and Gifted as Buta Prasad on World...