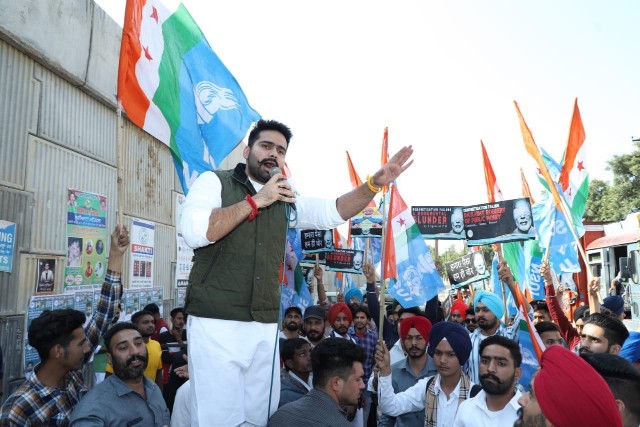 The National Student Union of India (NSUI) under the leadership of Punjab President Akshay Sharma on Friday held a protest on the 3rd anniversary of Demonetization at Moga.

Addressing the media, Sharma said the demonetization was independent India’s darkest day and worst move amongst all anti-public economic schemes of the Narendra Modi Government.

Sharma said the government has not only run a well-tuned economy under the UPA government into the ground, but has also been misleading the general public with divisive and socially damaging actions and statements. He said Demonetization was Independent India’s biggest economic scandal and fraud, and a day future generations will remember and never forgive the BJP government for.

“The loss of employment opportunities at such a large scale is unprecedented in our country, and will have long term implications. Also, the numerous bank frauds, and inaction by the Central Government are creating social unrest which threatens the foundations on which a modern India has been built”, said Sharma.

Submitting a memorandum to the Deputy Commissioner, Sharma registered the strongest protest against the anti-growth and anti-common man policies of the Central government led by Prime Minister Narendra Modi. “As we pledge to walk alongside all our brothers and sisters in this definitive battle for saving the Indian economy and dreams and aspirations of a billion people, we want the BJP to know that we shall never let their ineptitude to run the nation and the economy hurt our country’s hopes,” he added.

‘Jindua’ that will make you Laugh, Cry and Smile!