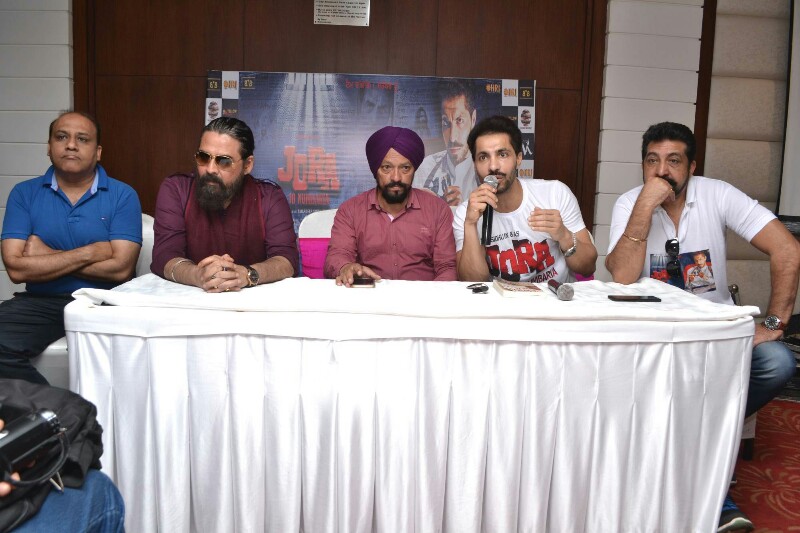 Politics and Power move parallel to each other, the more you grow in Politics, the more you will be addicted to drug of Power. Film ‘Jora 10 Numbaria’ shows all the lanes of politics, power, crime and revenge which head towards the grey aspect of life. It’s the movie which is going to beat all the norms of action and drama. The movie depicts some power packed scenes and strong story base which will hit the cinemas on 1st September.
‘Jora 10 Numbaria’ is presented by Bhatinde Wale Bai Films in association with Ohri Production and is a venture of It’s A Renea’ Entertainment. Film presents Deep Sandhu as Jora, who is protagonist of the film and Bollywood’s legendary actor Dharmendra. Film cast also have Hobby Dhaliwal, Sardar Sohi, Mukul Dev, Ashish Duggal, Mukesh Tiwari, Mahabir Bhuller, Yaad Grewal, Kul Sidhu and Neetu Pandher. The film is produced by Amardeep Singh Gill and Mandeep Singh Sidhu. The story is written and directed by Amardeep Singh Gill.
Actor Deep Sidhu quoted, “I had great time shooting this film. I have given my 100% to justify my character ‘Jora’ on the screen. I am sure audience will see another level of action in ‘Jora 10 Numbaria’. Hope the audiences will like my character and the film.
Actor Mukul Dev said, “Each character has its own identity in the film. Every character in the film is strong and narrates its own story. The story line is amazing and I hope it will rock the cinema hall screens”.
Actor, Ashish Duggal said, “It’s an amazing ride working with director Amardeep Singh Gill and his team. I have been part of Punjabi film industry from many years and this film is special for the whole team. I hope everybody likes it”.
Actress Kul Sidhu said, “I am feeling great to be the part of this film. I have learned a lot during the shoot and everyone on the set was so helpful. I thank the producers and the director for choosing for this film and making me to perform my best.”
Director Amardeep Singh Gill said, “Making this film has been an awesome experience as a director as I am working on this film from past many years. The film was shot at 110 amazing locations which is a plus factor. Deep Sidhu is a wonderful actor and his character is powerful which you will see in ‘Jora 10 Numbaria’.
Mandeep Singh Sidhu said, “In simple words this film is amazing. We tried our best to show something apart from the rest. It’s a film of new concept, new genre and audience is going to love it”.
Executive Producer of the film is Navdeep Singh Sidhu and Gursimran Singh Sidhu. Associate director of the film is Prem Singh Sidhu. The credit for action director goes to Salam Ansari. The film is distributed by a globe moviez.

‘Saak’ will highlight importance of relations; Mandy Takhar and debutant Jobanpreet Singh in...