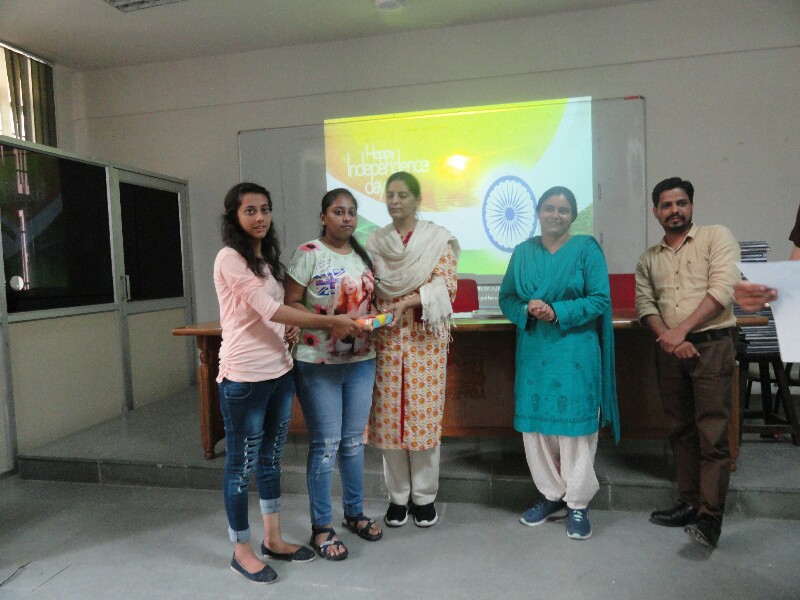 Historical Society of the Guru Gobind Singh College for Women, Sector – 26, organized a Declamation Contest on The Role of Women in the Indian Freedom Struggle to mark 71st celebration of Independence Day and 75thanniversary of Quit India Movement (1942). The aim of this event was to highlight the participation of women in the Indian Freedom Struggle. Around 60 students from all disciplines participated in the event and 25 of them shared their views with focus on active participation and sacrifice of women in the Revolt of 1857, Swadeshi Movement (1905), Non-Cooperation Movement (1920), Civil Disobedience Movement (1929) and Quit India Movement (1942). Some students also focused on the revolutionary activities of women during the freedom struggle. Many women freedom fighter like Rani Luxmi Bai of Jhansi, Begum Hazrat Mahal, Kasturba Gandhi, Sarojini Naidu, Annie Besant, Madam Bikaji Cama, Sarla Devi Chaudharani, Kamla Nehru, Vijay Luxmi Pandit, Aruna Asif Ali, Lakshmi Sehgal, Kadambni Ganguly, Bina Das, Urmila Devi, Kalpana Dutt, Usha Mehta and Maharani Amrit Kaur etc. were remembered.

In the end, prizes were distributed. Alisha, Manvi and Sahin, and Azra were awarded 1st,   2nd and 3rdprize respectively, besides consolation prizes were given to Sushil and Preeti.