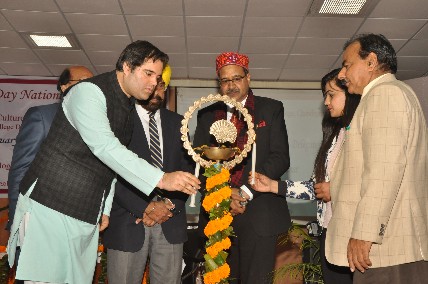 The P.G. Department of Sociology of D.A.V College, Chandigarh in association with HEAL Society, Chandigarh conducted a one day National Seminar on “Media, Society and Culture: Interrelations and Emerging Trends” on Feb 8, 2018 in the college campus. Eminent scholars from fields as diverse as media and journalism, politics, and academics shared their ideas on the vital issue of the changing dynamics of the society, youth and culture due to emergence of new forms of media.

Welcoming the dignitaries and the participants, Principal Dr. B. C. Josan appreciated the efforts of the faculty members and students in organizing of the seminar and remarked that discussing the interrelation between media and youth is the need of the hour.

The inaugural address by Sh. Varun Gandhi focused on the positive role of media and Citizen Journalism. He said: “Media plays an important role in creating a narrative of society and media should be more strident in this endeavor…rather than being a watchdog it should be a partner in progress of the country.” He said that the onus of creating positive sociological icons is on the media and to build the democracy of our dreams, media can empower the citizens to make the elected representatives accountable. He also talked about tackling the issues of corruption and shrinking talent pool head on, in order to bring about political reforms on a grander scale.

Delivering the keynote address, MLA Kanwar Sandhu, (former resident Editor of Hindustan Times and Indian Express) deliberated upon the challenges faced by media today and reflected upon the “incestuous relationship between the corporate, the politicians and media houses”. Prof. S. P. Bansal, Vice Chancellor, Indira Gandhi University, Meerpur closed the inaugural session, laying emphasis on the responsibility of media to foster a rich cultural legacy and values amongst the youth.

In the plenary session, Prof. Sherry Sabbarwal (Coordinator, Department of Social Work), Prof. Manjit Singh ( Department of Sociology, P.U. Chandigarh), Prof. Archana R. Singh, (Chairperson, School of Communication Studies, P.U. Chandigarh), and Sh. Rajiv Ranjan Roy (Author and Senior Assistant Editor, Daily Post, Chandigarh) presented their views in a Panel Discussion on ‘Media and Youth Culture’. While Prof. Archana tossed up questions of conglomerisation of media and how it has created a community of specific interests, Prof. Manjit Singh talked about the necessity of an ideological stance amongst the youth. Sh. Ranjan Roy commented that ironically, the so called icons in journalism are not its representatives at the grassroots level. However, as compared to the other pillars of democracy, media is still doing a fantastic job.

According to Dr. Jagdish Chand Mehta , the convener of the seminar, the “purpose of the seminar was to explore the changing dynamics of the society due to the emergence of new forms of media.”

Three parallel sessions based on various sub themes like Media and Child Governance, Media’s Role in Building a New India, Gender Politics and Cinema and Social Implication of Media on the Society were held, where more than 70 participants presented their papers debating and deliberating upon the role of media in shaping our society and culture. The seminar was an enriching experience for all scholars and delegates.