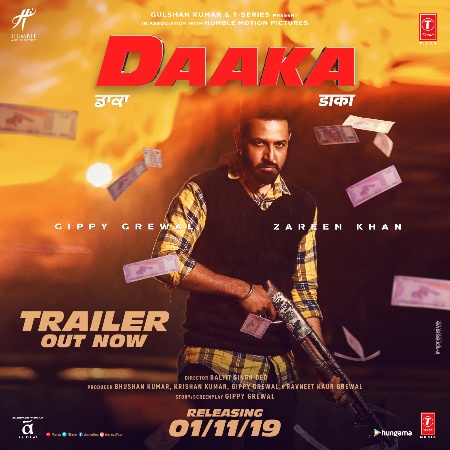 Gulshan Kumar & T- Series, in association with Humble Motion Pictures are all set to release their upcoming Punjabi film ‘Daaka’. On Saturday, the makers of the film released the trailer.

Baljit Singh Deo’s directorial venture ‘Daaka’ features Gippy Grewal and Zareen Khan in lead roles. Along with them, Rana Ranbir, Mukul Dev, Prince K.J, Hobby Dhaliwal, Shavinder Mahal, Ravinder Mand, Baninder Bunny, Rana Jung Bahadur, Shehnaaz Gill will be seen essaying pivotal roles as well.
The multi-talented Gippy Grewal commented, “As an artist, every project we associate with is very important to us. However, there are some concepts you put your soul into it and Daaka is one such project for me. From writing its first draft to watching the completed edited film, this has been a journey to be proud of. Now, as the trailer of the film is out, I just hope people will give it the same amount of love they have showered on me for so many years.”

The leading lady of ‘Daaka’, Zareen Khan said, “Punjab has been very kind and loving to me. After my first film, I was getting a lot of offers but I wanted to do something different. And Daaka is not only a wonderful concept but working with Gippy Grewal again has been an amazing experience. The trailer of the film will definitely ignite the excitement among the audience.”

Sharing his views, the captain of the ship, Baljit Singh Deo said, “I feel suspense thriller is one genre that the Punjabi industry has not explored much. When we decided to work on this project, we tried to best that it will be no less than any Bollywood thriller. The whole team of action has worked so hard. I just hope we would be able to bring some breath of fresh air in Punjabi Industry.”

Bhushan Kumar, who produces the film with Gippy, says, “Daaka is going to be a thrilling yet entertaining film. The trailer will add to the curiosity amongst the audiences.”

The story and screenplay of the film is written by Gippy Grewal. Daaka is produced by Bhushan Kumar, Krishan Kumar, Gippy Grewal and Ravneet Kaur Grewal. Jatinder Shah, Aditya Dev, Jay K and Rochak Kohli are music directors of the film. Vinod Bhanushali and Vinod Aswal are the co-producers of ‘Daaka’.

T-Series’ presented ‘Daaka’ will hit the theatres on 1st of November 2019.