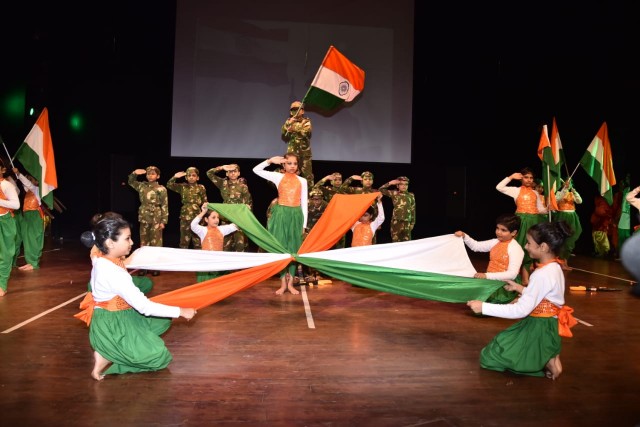 The programme commenced with the ceremonial kindling of the lamp by Director Naveen Kumar Mittal and the Principal Mrs. Sangeeta Mittal.

This year the students of CRB Public School presented some educational events that hinted upon the ill effects of mobile phone and plastic. Crisis of Moral Values in today’s generation was also skilfully presented by the students.

The celebration which began with Ganesh Vandana presented by Class VI students left the audience awestruck. The jubilant and cheerful tiny tots won everyone’s heart. Qawaali, Funny dance and Circus constituted some of the unique events of the show. Traditional dance forms of India like Bihu, Garbha, Haryanvi, Giddha and Bhangra were a feast for the eyes. Excessive use of mobile phones and plastic can be devastating were beautifully showcased by the students of class IV enthralled the audience with their patriotic dance in such a way that the hall resounded with their slogans. The play showcased the importance of parents in the life of a child and their sacrifices for their children. Inspirational fillers on different issues were also presented occasionally.

Every energetic and thrilling event tied the audience to their seats till the show concluded with the National Anthem.