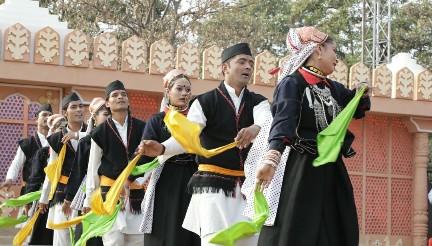 The 9thedition of the Chandigarh National Crafts Mela, currently underway at Kalagram (Chandigarh), continues to draw huge footfalls   on the 10th day here today. Mela buffs started converging on the venue since morning to be in communion with the fascinating folk traditions and cultural heritage of the country. The annual cultural bonanza, jointly organized by the North Zone Cultural Centre (NZCC), Ministry of Culture, Government of India, and Chandigarh Administration, the festivity has emerged as a major attraction for the young and the old, be it buying their choicest handloom/handicrafts items, relishing the culinary flavours or haunting folk tunes of various regions of the country.

The day activity started with a host of colourful stage performances which kept the audience hooked for hours. The popular folk dances of various states in the morning segment, included Rajasthan’s Kachi-ghori, ‘Been-jogis’ from Haryana. The traditional folk dances of Odisha, ‘Goti Pua’, ‘Gaud Maria’ (Chhatisgarh),, ‘Bhangra’  and ‘Gidha’ robust folk dances of Punjab, and ‘Chhapeli’ dance of Uttrakhand proved the real show-stealers of the day. The audience appreciated each performance through their vigorous claps as they shook a leg. The ground artistes, including ‘Nachar’ party and ‘Been-Jogi’, ‘Bajigars’, from Punjab, ‘Nagada’ party from Haryana and ‘Bahurupiyas’ from other parts of country, entertained the gathering.

Food lovers had a date with their traditional, lip-smacking culinary wonders from various regions of the country, including Punjabi, Rajasthani, Bihari, Gujarati, Jammu and Kashmir, Uttar Pradesh, Maharashtra, and other parts of the country. For the sweet tooth, hot ‘Jaleb’ or ‘Jaleba’, a specialty from Gohana in Haryana, ‘Gulab-jamun’ were their hot favorite as they relished the piping hot savories. Camel rides, swings, car/jeep rides and other kept the kids amused through the day. Behrupiyas reprisinf some mythological characters entertained the gathering.  School children, who visited the Mela venue, were seen clicking selfies with the ground performers.

This season’s theme being Dadra and Nagar Haveli, the visiting Mela lovers from the tricity and its neighboring states, including  Punjab, Haryana, Himachal Pradesh and others, who got an opportunity to know more about India and folk cultures and enjoy their soothing fragrances. The beautifully designed huts bearing traditional Warli paintings prominently displayed on the walls, which speaks volumes for the creative masters of the times, offered a slice of the rural India. The Mela ground offered a typical rural metaphor to be seen or believed, with every nook and corner dotted with huts and homesteads.

The Mela offered an opportunity for the incurable shoppers drawn from distance corners of the country, who have a lot to choose from a range of handloom, handicraft, jewellery items, and designers’ crockery items, including phulkari from Patiala, Pochampali handloom, Ikat from Telngana, tussar and kosa from Maharashtra, stone painting from Rajasthan’s Jaipur region, and Kohlapuri chappal  from Maharashtra and Patiala Jutti from Patiala. The ongoing wood-sculpture camp, in which as many as 16 prominent wood sculptors from various states are participating, attracted inquisitive guests, especially the younger lot, with a penchant for the specific genre of art. The NZCC has designed this camp on the occasion for the promotion of the art.

Concluding day’s ( Nov 12) fixture: Prominent folk singer of Punjab Anmol Gagan will be the star performer on the concluding day of the musical evening (November 12).  The Mela will continue daily till November 12.