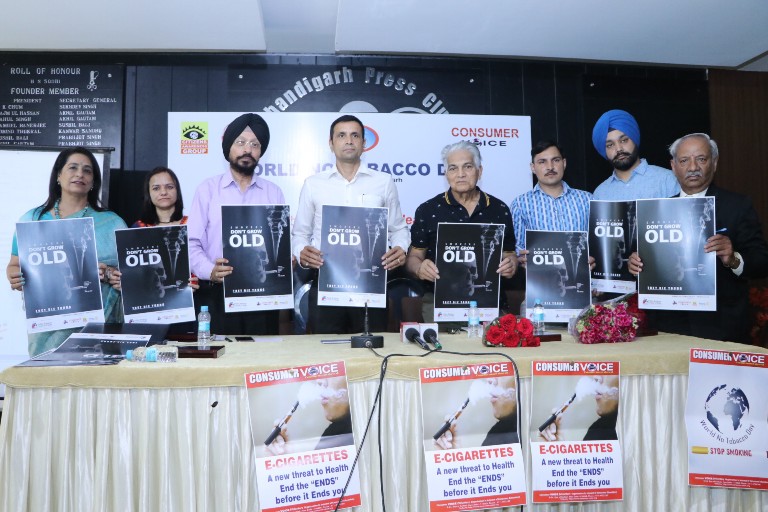 Citizens Awareness Group, Chandigarh and Consumer VOICE, New Delhi working on tobacco control issues in the state of Haryana, today on World No Tobacco Day organised a seminar at Chandigarh Press Club. The purpose of the event was to spread awareness about ill effects of tobacco and sensitization of various stakeholders including consumer activists, health experts for demanding ban on E-cigarettes in the state and strict enforcement of tobacco control laws.

World Health Organisation has designated 31st May as World No Tobacco Day to be observed every year.It is celebrated to create awareness and encourage people to reduce or completely stop tobacco consumption in any form all across the globe. World No Tobacco Day 2019 is   focussing on the impact tobacco has on the lung health of people worldwide.

According to GATS-2 (Global Adult Tobacco Survey) report 23 percent of adults in Haryana consume tobacco in some form. Since E-cigarettes are new emerging threat in country and are being used to lure youth in the form of nicotine addiction who then slowly gravitate towards tobacco cigarettes the ban on them is urgently needed.

The Ministry of Health & Family Welfare had issued an advisory to all States/UT`s, to ensure that Electronic Nicotine Delivery Systems (ENDS), Heat-Not-Burn devices, Vape, e-Sheesha, e-Nicotine Flavoured Hookah, and the like devices that enable nicotine delivery are not sold (including online sale), manufactured, distributed, traded, imported and advertised in their jurisdictions.  Considering the harmful effects of (ENDS), commonly known as E-cigarettes, states of Bihar, Punjab, Maharashtra, Kerala, Karnataka, Mizoram, Jammu & Kashmir and Uttar Pradesh have already banned the sale of E-cigarettes.

Ekta Purohit, Manager-Projects Consumer VOICE, New Delhi “E-cigarettes are being marketed as a harm reduction product which is contrary to the truth .Youngsters are being lured as it is easily available in different flavors and these E-cigarettes pose significant health risks to users. We sincerely urge government of Haryana to ban e-cigarette to save precious lives from nicotine addiction in the state of Haryana”.

Dr. S.M. Bose, PGI retired said, “Currently, we are facing the new challenge of ENDS and as doctors are deeply concerned since it’s being promoted as a harm reduction device. In reality, these new nicotine products are just another way for the companies to increase their profits, as well as aggressively marketing it to youth with no concern about the impacts of lifelong nicotine addiction on the users”,

Shri Surinder Verma, Chairman Citizens Awareness Group said “These newer forms of addiction are destroying our younger generations. Before it’s too late we request our state government to completely ban e-cigarettes in the larger interest of public health and save our citizens from this nicotine menace.”

While addressing the gathering DSP, CID, Ram Gopal said that more awareness campaign should be organised to make people aware of the side effects of consuming tobacco and cigarettes. He emphasized that we should more need to focus especially on the teenager, who are more vulnerable and easily fall into drugs because of lack of awareness.

In today’s technology-driven era, the no-tobacco campaigns have been “successful” in the sense that people have moved from smoking to vaping through e-cigarettes which are as harmful to health, said CJ Singh, Senior Vice President, Public Relations Council of India.

The easy online availability of e-cigarettes is attracting even school-going kids to access and consume equally toxic vapours The term is used because e-cigarettes do not produce tobacco smoke, but rather an aerosol, often mistaken for water vapour, that actually consists of fine particles which contain varying amounts of toxic chemicals, which have been linked to cancer, as well as respiratory and heart disease.

PRCI Chandigarh Chapter launched posters designed by CorePR on this occasion for sensitise public and would be distributed and put up at various public places.

It is estimated by WHO and Ministry of Health that around 10 -12 lakhs people die every year in India due to tobacco consumption and majority of them come from less affluent families.