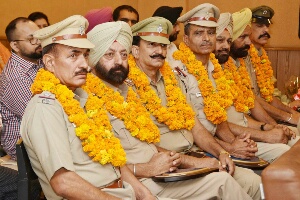 The following police personnel / Home Guard Volunteers have also been rewarded with suitable cash rewards and Commendation Certificate for their good work and best performances in their assigned duties with utmost devotion and keen interest.

The following civilians also rewarded by the W/DIG/UT with commendation certificate and cash Rs. 5,000/:-