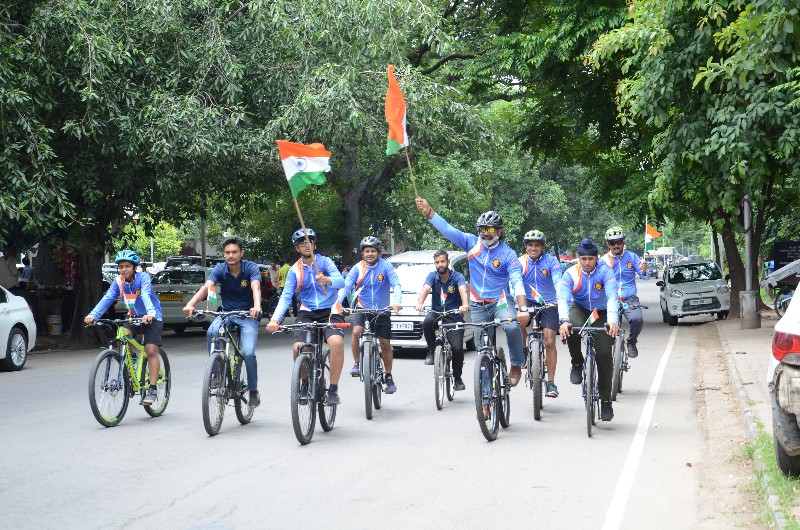 To mark the Independence Day, city cyclists will salute the passion  and dedication of Border Road Organization (BRO) by hoisting the tricolor on the world’s highest highway tunnel – Atal Tunnel, near Rohtang, Manali on Monday. This edition of annual ride Jashn-e-Azadi being organized by Cycleworx Club comprising seven riders including the youngest 12-year-old Tanmay Rawat will be the distance of 75 kilometres from Kullu to have the celebrations of lifetime.

Vikrant Sharma, who is leading this ride, said that the role of BRO in the defence of the nation has been commendable. The border roads built by them for the Indian Army stationed on the border keep them connected to the rest of the country throughout the year to ensure security round the year.

The cyclists will hoist the tricolor with BRO,  builders of the Atal Tunnel at a height of more than ten thousand feet above the sea level. The ride will be flagged off by the Press Club of Kullu and high officials of the district administration on Monday. The participating cyclists include Vikrant Sharma, Sudeep Rawat, Ashwini Kumar, BD Meena, Jayant Prajapati, Mehakpreet Singh and Tanmay Rawat.

Vikrant said that it has been the tradition of the club to organize such rides every year to mark I-Day and dedicate it to the bravehearts of the nation. Last year his club celebrated Independence Day with the Indian Army at Hussainiwala border near Firozpur.