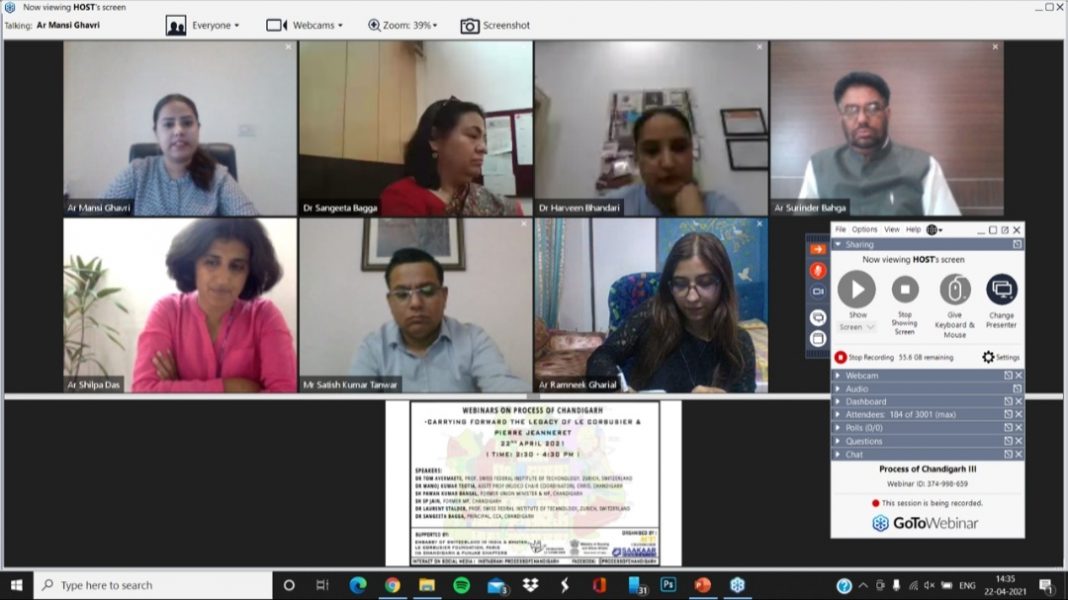 A rich conversation and some well-rounded views were shared during the concluding session of tri-webinar series – Process of Chandigarh: Carrying forward the legacy of Le Corbusier and Pierre Jeanneret on Thursday. The theme of the day was Public Participation.

The event is organized by ACT! Chandigarh and Saakaar Foundation with support from GOI Ministry of Housing and Urban Affairs, Swiss diplomatic representations in India and Bhutan, Le Corbusier Foundation Paris, Indian Institute of Architects, FSAI and ASSOCHAM-GEM.

Swiss Scholar Dr. Tom Avermaete reminded the audience that Chandigarh today must learn from the Chandigarh of past in maintaining the important connections with its natural landscape and ground – local patterns of life and construction techniques that is intrinsic to its unique aesthetic, an intense relationship with climate and an ongoing mediation with the different agencies at work in the city.

Another Swiss Scholar, Dr. Laurent Stalder said that a city is a place for public negotiations and we must change our gaze from the objects and the buildings to the density of relations as we inevitably go through transformation.

There was a consensus amongst Indian speakers that the present setup is inadequate to resolve issues of the city and to lead us towards a sustainable future that is closer to its original vision. Many methods of public participation and building in accountability within the system were suggested and discussed.

Dr. Manoj Teotia, Assistant Professor, CRRID in theme introduction pointed out that Chandigarh has borrowed heavily from Punjab which served a limited purpose. Chandigarh now has to evolve its own public participation instruments and mechanisms like ward committees, advisory councils, self-help groups etc. held accountable through a regular social audit. The present system of Mayor as well as Advisory Council is merely ceremonial.

Satya Pal Jain, former MP from Chandigarh said, “Correct decisions for important issues cannot be achieved in present setup led by officers who are in the city for short spans of time, be it the transport policy, education policy, excise & taxation, rehabilitation of colonies or issues of CHB houses. Unfortunately, even during the corona pandemic public inputs were not taken in important decisions.” He also mentioned that bureaucracy resists public participation.”

Pawan Bansal, four-time MP from the city lamented that Chandigarh without a legislature is a bureaucratic run administrative setup.Civil servants are no substitute to democratically electedrepresentatives. Even the system in place before 1984 worked much better where the local advisory body under the Chief Commissioner had more hands-on involvement and responses were mandatory. UT of Chandigarh is in a sorry state in absence of an empowered elected body. He discussed in depth the basic infrastructure issues of the city including an absence of proper implementation of the provisions of our constitution in transfer of funds and functions to the Municipal Corporation.

Dr. Sangeeta Bagga, Principal, Chandigarh College of Architecture summarized the proceedings and stressed on the need for such a constructive dialogue to continue for a better tomorrow.