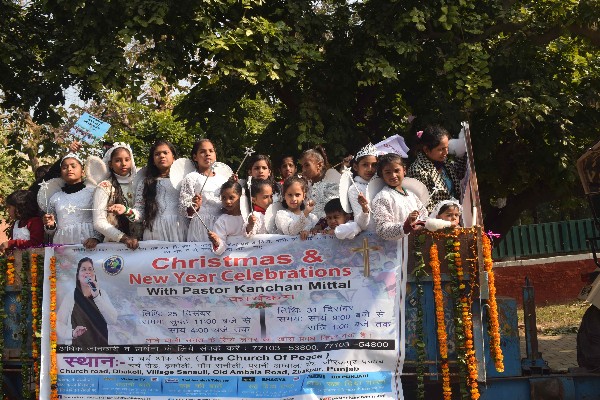 Tricity Churches Association celebrated Christmas by organizing a colourful Shobha Yatra. The procession started from CNI Church, Sector 18, here and passed from different parts of city before culminating in Sector 25.

The inaugural prayer was offered by Rev. Bishop Ignatius Mascrenhas of the Roman Catholic Church, Chandigarh and Shimla Diocese followed by a message on the relevance of Christmas in the daily lives of people. He also highlighted the Birth of Jesus Christ mentioning that Jesus started with humble life and then witnessing the sufferings and troubles of the masses took upon the holy mission by sacrificing the worldly things, which resultantly changed the world (AD and BC).

Lawrence Malik, Adviser of the Association while giving the message of Christmas wished everyone on the occasion. He said Shobha Yatra is an occasion which brings together the Christian community and sends out the message of love and peace.

The procession covered 19/27 Light Point, 20/30 Light point, 20 Market, 21 Market, Aroma Light, 22 Market, 22/23 Light Point, 23 Market, 23-24 Light Point, 24 Market, 25 Sector Rally Ground. It witnessed a warm and cordial welcome by the residents of different sectors and many of them later joined the procession to take part in the concluding prayer ceremony at Sector 25.

All the Churches of Chandigarh, Mohali and Panchkula presented colourful tableaus depicting the birth, crucifixion and re-incarnation of Jesus Christ. Carols spreading the holy messages of peace were sung by the children. The gathering was served with Community Lunch and later the ceremony was concluded with a community prayer.

Republic Day Celebrations kick off with Exhibition in memory of Longewala...