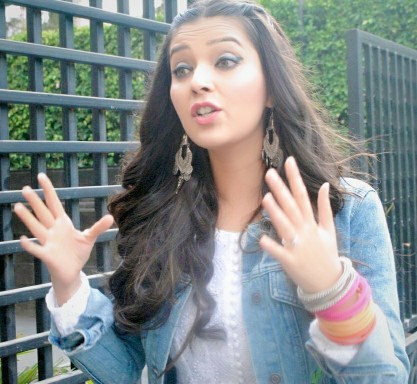 5 December 2017
DIVYA AZAD
“Chandigarh mein vapis aa kar shanti mili hai.” Chandigarh has the most peaceful environment which I am unable to get in Mumbai. The simplicity of Chandigarh city can’t be found anywhere else. ‘Mumbai mein Subha Se Raat kab ho jati hai pata hi nahi chalta’. Mumbai has a very fast Lifestyle which we Chandigarh people find very difficult to cope up with, says actress Mansi Srivastava.
Mansi is currently working in Star Plus Ishqbaaz as Bhavya opposite to Rudra. She was in city to discuss about the latest track on the show. While explaining the twist and turns of show, she also mentioned her feelings about the Chandigarh city. Mansi is from Chandigarh only and she really miss the city. Pal Dhabbe de rajmah are her favorite.
She recalled her struggle days and told about the nervousness she used to feel during audition days. Thanking her best friend in the industry Suchita Khanna, she is said “Suchita helps me in each and everything. She even tells me where I need to improve and how it can be done. I always wanted to be on stage but never thought it would be a TV platform. Our show Ishqbaaz was started in 2016 and took the country by storm. No sooner did the characters shivaay, Omkara and Rudra Singh Oberoi became a rage.
Mansi told media that Now after years finally Rudra has a lady love Bhavya entering his life. The main antagonist Svetlana is back in the Oberoi house and as her prophecy of Breaking the Unity of the Oberoi brothers comes true with Shivaay leaving from Oberoi mention along with his wife Annika.
The show will now witness its biggest high point. Each character in the show will be seen playing a part similar to a character from the Epic Saga Ramayana.
To know more watch ishqbaaz from Monday to Friday at 10 p.m on Star Plus.

Amritsar Twins Rahul Rajan are in the city to promote India’s...