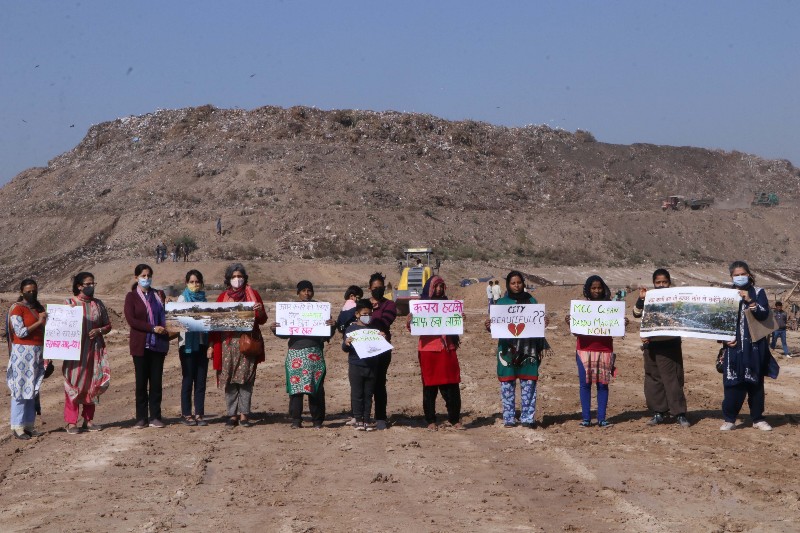 Up in arms, a group of concerned mothers led a peaceful public demonstration on Friday at the Dadu Majra dumpsite, criticising the Chandigarh Municipal Corporation’s lackadaisical approach in failing to clean up the open dumpsite.

The mothers, who had gathered from different parts of the city including the Dadu Majra colony, claimed that despite many assurances, the situation at the dumpsite had only gotten worse. They reasoned that they had no choice but to gather peacefully as they are concerned about their children’s future and want to have their voices heard, particularly with the upcoming municipal elections.

“We had earlier visited the residents of Dadu Majra and found that close to 50,000 residents were living in inhumane conditions, the stench was unbearable and the number of diseases including skin allergies, asthma and others had increased. The dumpsite was also a major source of air pollution. Promises made to clean up the dumpsite were not fulfilled,” said Samita Kaur member, Warrior Moms from Chandigarh who has taken up the issue.

She went on to suggest that it was a pity that, while on one hand Chandigarh prides itself on being a planned and clean city, its residents were suffering the consequences of the open-air dumping site. “It came as a shock to several mothers as they realized that while they were dutifully segregating and recycling their waste, the civic body was dumping waste without any separation at the Dadu Majra landfill. This has become a cause of health and environmental worry for not only residents here but also across the city,” said Samita.

The Warrior Moms, seeing the plight of the residents and increasing pollution and its health impacts, wrote to the Municipal Commissioner, requesting action, and a group of citizens, including the mothers, went to meet her, where she assured them that action will be taken to clean the dumpsite.

“The Municipal Commissioner conducted a site inspection. But post that there has been no action taken. Now that even the Municipal elections are round the corner citizens are determined to intensify this campaign and demand that the work on cleaning the Dadu Majra dumpsite begins. The civic body cannot just ignore this issue as everyone has the right to breathe clean air and a right to a dignified life,” said Harinder Singh resident Dadu Majra.

He also added that the nearby villages are facing major issues as the soil is being polluted, groundwater is contaminated, and the total rural set up has changed because of inclusion of these villages in the Chandigarh Municipal limits. “The ending of Panchayats has led to crushing of our voices against the removal of the dumpsite. Doesn’t the administration see us as human beings, aren’t we the citizens of this country. We will not stop fighting till this dump site is cleaned and reclaimed,” he said.

Residents also pointed out that, given the way the civic body has handled the waste crisis at Dadu Majara, they were not surprised that Chandigarh’s ranking dropped to 66th nationally (score-wise) and 16th in the 10 lakh plus population category in the recently released Swachh Survekshan rankings for 2021 by the Union ministry of housing and urban affairs.

“Progressive India interestingly has turned around, stealing from the children, their playground and turning it into the city dump at Dadu Majra ,sadly the garbage is not segregated so the  hazardous waste , the biodegradable  and e- waste  all playing havoc with the health of the citizens. Decades ago, Dadu Majra dumpsite was a playground where children used to play but now it is a garbage dump with a 20 feet high wall around it. According to reports civic body is able to only process 16 percent of the waste dumped here between January to May this year so a majority of the waste is simply unprocessed,” said Neety Cheema a mother from Chandigarh who was part of the protest on Friday adding that a residential colony was located just less than 50 meters from the landfill and its people were most vulnerable to health risks.

Mothers also alleged that with people being forced to live so close to the landfill, which was not even treating waste, it was a clear case violating several norms including human rights too. “The civic body has been pulled up by the judiciary too as a case has been filed in the High court. There have been cases of epidemics, fires, studies conducted have shown contamination of air and solid yet there has been no action. How long will citizens wait for the civic body to wake up,” said Samita Kaur

Dadu Majra landfill happens to be the only notified dumping yard in the city and is located on approximately 45 acres of land in Sector 38.

Global restaurant App Y the Wait is Free Now in the wake...