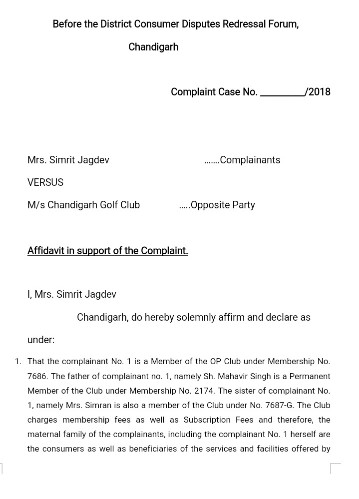 The Chandigarh District Consumer Forum-1, headed by President Rattan Singh Thakur, today issued urgent dasti notices to the Chandigarh Administration, Chandigarh Golf Club and Club Member Lt. Gen. (Retd) B.S. Takhar, on a lady NRI’s complaint alleging grievous injury to her 5 yr old British Citizen son due to negligence of the member and club authorities. The complainant has sought Rs. 4.50 lakhs in damages. It has also been said that the activities at the Club pool are hazardous to life and should be stopped.

The Forum has issued notice for a short date in view of the complainants demand for the recording of CCTV footage of the incident. Counsel Chandgothia contended that the crucial evidence of CCTV may be lost due to passage of time, if the court issues long date notice. The Forum accepted the plea and issued notice for 25th September.

NRI, Mrs. Simrit Jagdev, in her complaint filed through counsel Pankaj Chandgothia, said that the complainants are on their annual visit to their maternal home in Chandigarh, since July, 2018. During this visit, in the evening of Saturday, 4th August, 2018, the complainant no. 2 went to the Club for availing and using the Club swimming pool. Around 6:15 pm that day, a loud shriek of a child shattered the environment. Actually, a large piece of broken glass had penetrated the right ankle of Ranveer from the back. Heavy bleeding started from the injury. When the place was examined, it was found that a broken drinking glass was lying near the swimming pool, which was the cause of injury. The Child had to be rushed The cut caused by the broken glass was very deep and large (4 x 2 x .75) in the Tendon Achilles, so much so that even the tendon was visible and oozing blood. The wound was approximated with Glue, as a measure of First Aid, at the Clinic.

That after getting medical aid for the Child, the complainant no. 1 came back to the Club where she met Mr. Fateh Singh Gill, a Club Office Staff, who showed her the CCTV recording of the incident. When the matter was investigated upon the complaint of the complainants, the Club Management examined the CCTV footage to see the reason and cause. The Club Management told the complainants that the negligence and carelessness of a Club Member Lt. Gen. B.S. Takhar, had resulted in the injury to the son of the NRI. The member, against written norm, ethics and caution notice, carried a drinking glass inside the area of the swimming pool and most carelessly left the empty glass near the swimming pool. The said glass broke and caused the grievous injury.

Pankaj Chandgothia, counsel for the complainant contended that the Club Staff did not make any official report of the incident, although they are obliged to do so. This was an attempt to brush the incident under the carpet and prevent legitimate action against the staff and the negligent member concerned.

It was further submitted that initially the member and the Club management owned responsibility for the injury but later on backed-tracked on their words. Chandgothia said that the Club and its swimming pool is open for use by its Members, dependents and guests. All such institutions and places have to ensure the safety of their users. They all are bound by safety and public liability laws. Swimming pools pose the highest risk for injuries among children. When accidents take place in a public, private, or personal swimming pool, the pool’s owner/manager/safety experts will be held liable. Premises liability statutes lay down the accountability for the incident and any damages caused.They are required to constantly supervise the pool to keep it free from foreign and hazardous substances, have lifeguards on duty and have first aid facility. Failure to uphold these responsibilities will cause the pool owner/manager to be held liable in the event of a swimming pool accident.

The Club is running a service which is hazardous to the life of the citizens and likely to cause fatal harm and injuries. The complainants have suffered physical, mental and monetary harassment, due to the deficient and negligent conduct. Their entire vacation in their hometown has been spoilt.