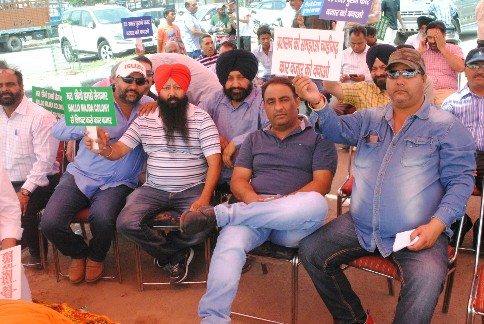 The Chandigarh Car Dealers Association today held a protest march at Halo Majra Chowk against Chandigarh Municipal Corporation. Car Dealers not only organized protest march even they also raised slogan against Municipal Corporation. Car dealers demanding that the car market should be shifted to another place instead of Ram Darbar. As they don’t want to run their business here just because poor condition of law and order. They demanded that they should be given a proper place in the part of the city to run their business otherwise they would gherao the municipal corporation office.

Gulshan Kumar, President of the car dealer association, said that 10 months ago, the municipal corporation had shifted car bazaar from sector 07 to Ram Darbar near the Halo Majra. Since then, the work of the car market has stalled completely. There are 64 members in association, but 51 have been given permission to run their business, the remaining 13 have already been unemployed. He said that in Sector 7 car bazaar market car dealers were showcase approximately 2000 cars, but here in Ram Darbar they can accommodate only 500 cars. The situation of law and order is very bad in this area, due to which the customer does not want to come in the area.

He added further that they have met many high officials several times but there is no benefit. Until now, our demand is not accepted, we will continue to stay on Protest and we will gherao the Municipal Corporation. We have a car market once in a week for which we are giving a rental of Rs. 3 lakh to the municipal corporation. Gulshan Kumar said that car dealers, who gave a huge revenue per week to the Chandigarh Municipal Corporation, have now decided to not to install a car market at the place fixed up by the municipal corporation.

He said that he has met the Commissioner of Chandigarh Municipal Corporation regarding his problem but he did not give any reasonable answer. However, when it was met with the city MP Kiran Kher, she was informed about the problem and she took a strong cognizance of the car dealer’s problem and assured them that the matter should be disposed off as soon as possible. Gulshan Kumar said that due to the closure of the car bazaar, the municipal corporation has suffered a loss of 3.50 lakh and the car dealers has suffered the loss about 3 to 5 crores of rupees.

Gulshan Kumar said that if their demands were not accepted soon, then in the coming days, car dealers would not only gherao the municipal corporation office.