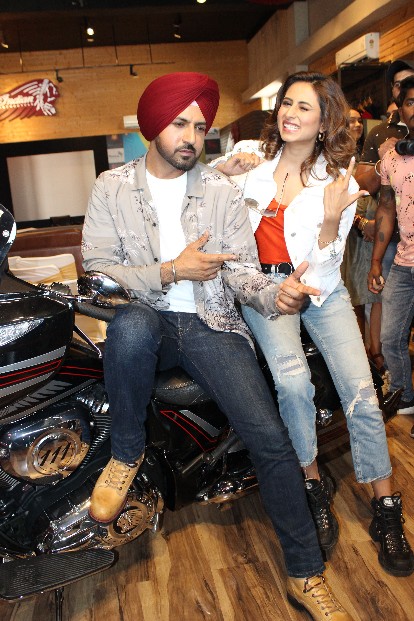 Sumit Dutt & Dreambook productions, in association with A Leostride Entertainment are all set to release their upcoming rom-com, Chandigarh-Amritsar-Chandigarh worldwide on May 24, 2019. To promote it in a unique way, on 21st May 2019, the makers of the film along with star cast organized a promotional bike rally from Chandigarh to Amritsar.

Directed by Karan R Guliani, the film stars Gippy Grewal, Sargun Mehta in the lead roles. Chandigarh-Amritsar-Chandigarh is a romantic comedy. Naresh Kathooria has written the screenplay and Dialogues of the film. Music and Background score has given by Jatinder Shah. The film will bring Sargun Mehta and Gippy Grewal on the screen together for the first time.
Actor Gippy Grewal commented, “Comedy is my favorite genre. But even in comedy films I always try to give content and different shades to the public. Chandigarh-Amritsar-Chandigarh is one such film which will definitely redefine the rom-com in Punjabi cinema.”

Actor Sargun Mehta said, “I feel very lucky that I always got to play different characters. Chandigarh-Amritsar-Chandigarh is a very fresh concept in Pollywood. Working with Gippy Grewal was a wonderful experience. I just hope the audience will love our chemistry in the film and shower their love.”

Speaking on the film, Director Karan R Guliani said, “This is my second film only. And, working with these experienced artists is a privilege for me. I have learned a lot from them and I have tried my best to do justice with the subject. I just hope that people will love Chandigarh-Amritsar-Chandigarh.”

Worldwide distribution of the film is done by Munish Sahni’s Omjee Group. Chandigarh-Amritsar-Chandigarh will release worldwide on May 24, 2019.