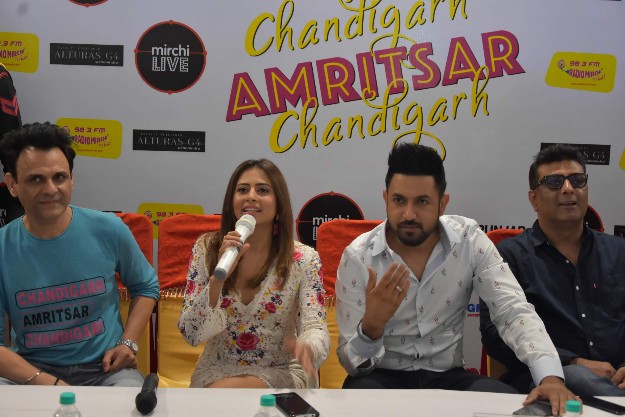 Mohali
23 May 2019
DIVYA AZAD
Visitors at VR Punjab mall were left dazzled as the star cast of Chandigarh Amritsar Chandigarh performed at the music concert, which was organized by Radio Mirchi.
Radio Mirchi, in association with Chandigarh Amritsar Chandigarh organized a live music concert – Mirchi Live with Gippy Grewal today at VR Punjab; where the whole star cast performed and promoted their upcoming film. The mind-blowing performances of the movie cast, the sensational music and the electric atmosphere was a pure bliss. The audience tapped their feet on each and every beat! Not only this, the add on was the unveiling of all new Alturas G4, driven by – Alturas G4 by Mahindra, Royalty Redefined. The event was supported by Grecian Super Specialty Hospital, Sector 69, Mohali as Health Partner. Grecian Super Specialty Hospital, armed with state-of-art equipment, has been touching the chords of population of North India since long. VR Punjab, a flagship regional lifestyle destination located in the Chandigarh Capital Region was their venue partner.
Chandigarh Amritsar Chandigarh is a romantic comedy with a bit of twist infused in it and is all set to steal the heart of audience on 24th May 2019, when it will hit the theatres. Movie will screen the deadly combo of Gippy Grewal and Sargun Mehta, who will be sharing the screen for the first time. This clearly has their fans excited! This will be Gippy Grewal’s second outing in 2019, after ‘Manje Bistre 2’. At the same time, it will mark Sargun Mehta’s second movie of the year also, after ‘Kala Shah Kala’. The film is directed by Karan Guliani and produced by Sumit Dutt, Anupama Katkar and Eara Dutt.
The Director of the film Karan R Guliani seemed happy  and was cherishing every bit of the promotional event. He said, “ I would like to thank all the people who have supported me and this film. I am glad to have collaborated with Radio Mirchi, VR Punjab and Grecian Super Specialty Hospital”.
Gippy said, “ I am sure this film is going to redefine rom-com in Punjabi Industry. Comedy is my favourite genre anyway. I am glad to be here today with my fans celebrating and cherishing our performances”.
Sargun Mehta commented on the event and said, “ I am doing a very different role this time, so my excitement level is very high. This event has added to my excitement and happiness. Glad to be here”.