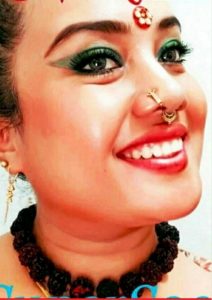 India’s World-famous Celebrity Astrologer and Numerologist Atlanta Kaashhyap have garnered a lot of fame after her prediction of celestial destruction in 2012 followed by her correct prophecy on actor Salman Khan being released from prison, the recently concluded Karnataka polls and actor Sanjay Dutt’s correct future predictions which proved to be true gave her more fame and laurels and has been scaling dizzier heights.

News is abuzz, that the beautiful and glamorous looking Atlanta Kaashhyap climbing the success ladder is now been the subject of discussion. Numerous eligible bachelors, mostly who are businessman and industrialist are vying to marry her. Getting tired of these marital offers, Atlanta Kaashhyap has hit upon a strange and surprising marriage offer which might bite the dust due to her uncanny demands.

A peek into her weird demands for marrying her is that the concerned person should give her Rs. 700 crore. Further to it 7 schools in 7 cities should be administered and maintained by him where poor people’s children can study. Next on the list is that the marriage ceremony should be performed within 7 months across 7 big continents of the world following 7 different rituals and cultures and so on.

On quizzing her about her unusual demands for marriage, the Celebrity Astrologer and Numerologist Atlanta Kaashhyap smiles and curtly replies,“From many days I was getting offers to marry and I was really fed up with these requests. So I came up with this unusual terms and conditions. There are three of them who are regularly coaxing me for marriage. So I gave them many of these terms and conditions.”

From her talks it seems that there is someone in her life. But one will have to wait and watch as to who the person might be. Only a film stars, politicians or industrialists are only capable to have such kind of money!

Dushehra celebrations to start with a Big Bang with the Son...