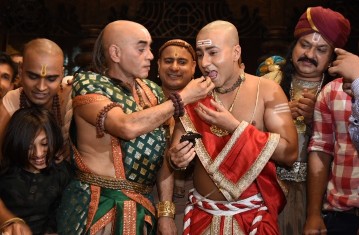 Sony SAB’s comedy drama ‘Tenali Rama’ is one of most popular shows on Indian Television that brings back some humorous tales of the 90’s. While the show is best known to fickle? the funny bones of its viewers with its exotic tales, the cast of Tenali Rama had a gala celebration on the occasion of its successful completion of 200 episodes. Ever since the show’s launch on 11th July 2017, the show has carved a niche position for itself in the heart and the minds of its viewers with its differentiated storyline. On this special day, the cast and crew including actors like Krishna Bharadwaj, Pankaj Berry and Manav Gohil came together to cut a cake and celebrate.

Abhimanyu Singh, CEO, Contiloe Pictures, said, “Tenali Rama is the first Indian historical comedy show that has been produced by us. I would like to thank the viewers for their support in making this a success and also to my team for their hard work and dedication that they have put in to make it a success.”

Sharing his happiness Krishna Bharadwaj (Rama) mentioned, ”I would like to thank all my fans for the love they have given me throughout. Its only because of them that the show is doing so well and that my character is  being appreciated.  We can’t wait for the next celebration when we complete 200 episodes”.

Sharing his happiness Manav Gohil (Krishdevaraya) mentioned, “It is a big day for all of us and a great celebration where we complete 200 episodes. This show has been really special for me as it teaches me a lot on a daily basis. I have a great time shooting on the sets with the amazing cast especially with Krishna whom I keep joking around with. I would like to thank all my well-wishers for showering us with so much love and request for their continuous support. We promise to continue entertaining them with some fantastic drama.”

We leave a mark through our fields: Jyoti Sharma