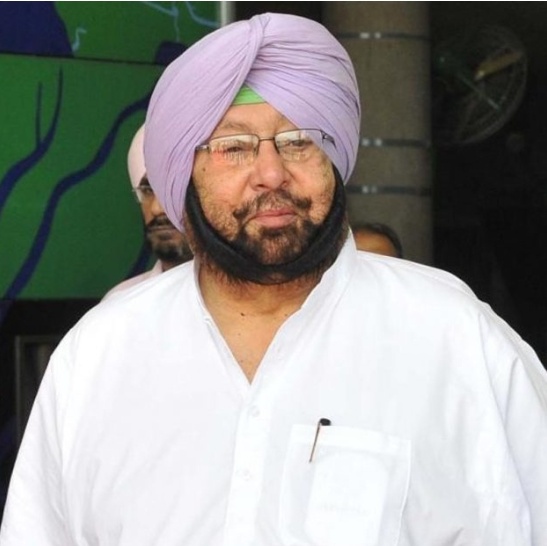 Participating in a Video Conference of chief ministers of Congress-ruled states with party president Sonia Gandhi, along with Dr Manmohan Singh and Rahul Gandhi, Captain Amarinder shared his state’s Covid containment strategy and the roadmap for economic revival.

During the meeting, Sonia asked the Chief Minister to convey her congratulations to the farmers of Punjab for a smooth procurement season, with the latter disclosing that more than 100 Lakh MT had arrived in the Mandis already, and the entire procurement process was expected to be completed by mid-May.

As against the estimated revenues of Rs 3360 crore for April, only Rs 396 crore had been received during the month, the Chief Minister disclosed, adding that the state’s Power Consumption had declined by 30% with a daily loss of Rs. 30 crore in collection of electricity tariff to the Punjab State Power Corporation Ltd. In addition, the State’s GST arrears of Rs 4365.37 crore are yet to be paid by the Government of India, he pointed out.

The initial report of the Group of Experts headed by Montek Singh Ahluwalia, on the economic and industrial revival of the state, was likely to be received in three months, and it would take another month after that to refine and finalise the same, said Captain Amarinder.

However, he said that despite the financial crunch, his government was committed to preparing the society and the common man to manage and contain the coronavirus, and was also taking every possible step to upgrade and readjust the state’s healthcare system to meet the challenges of COVID-19.

The Chief Minister was of the opinion that the decision on classification of zones as red, orange or green should be left to the states, which, in turn, could authorise the DCs to demarcate as per the ground realities. He cited the example of Patiala being classified as a red zone, even though Nabha – a major milk-producing area – is located in the district. Punjab state currently has 4 containment zones and 4 red zone districts. Fifteen districts are in orange zone and the remaining three in green one.

Providing an update on the Covid status in the state, which has reported a total of 1451 positive cases with 25 deaths (mortality rate of 1.72%), the Chief Minister said there had been a spike in cases in Punjab after Punjabis residing outside Punjab started coming back from Rajasthan and Maharashtra. Of the 4200-odd persons who had returned from Nanded, 969 had tested positive, though only 23 of them were symptomatic. Some results were awaited, he said, adding that the spike was expected to end, with the situation stabilising in the next 3-4 days, once testing of all such people is completed. All returnees are now being checked and quarantined, he added.

The Chief Minister warned of high risk of spread of infection in the state from those returning to the state especially the workers coming back from the Gulf in crowded ships. Four ships of migrants, mostly labourers, were expected to arrive in the next few days, while the first plane with NRIs was expected to reach Punjab on Thursday, he disclosed.

Giving details, the Chief Minister said around 20,000 international travellers are expected to return to Punjab in the next 3-4 weeks, in addition to around 12,000 who had registered in other states for coming back. As for the migrant workers wanting to go back from Punjab to their native states, he disclosed that 10 lakh had registered so far, of which 85% belonged to UP and Bihar. The State Government has sanctioned Rs 35 crore to provide for train travel cost of these workers, he said, adding that three trains left on May 5 for UP and Jharkhand and 6 more were scheduled for May 6.

But said his government had drawn up a comprehensive strategy to contain the spread, the Chief Minister declared. All persons coming back will be kept in quarantine for about one week until they have been tested for the virus, he said. Persons testing negative will be placed in home quarantine for another 2 weeks, while those testing positive will be placed in Containment Wards, he added.

With around 2500 regular tests being done daily, the total tests in the state had gone up to 30199, said the Chief Minister.

The Chief Minister also shared details of issues raised by his government with the Centre. These include pending GST arrears, demand for revenue grant for the next 3 months, review of the current year report by the 15th Finance Commission, among others. His government was also pursuing for relief to the poor and daily wage Agricultural and Industrial Labour including Migrant Workers who are badly affected due to loss of jobs/employment, he said, adding that the state had also sought urgent relief for MSMEs and the Power sector.