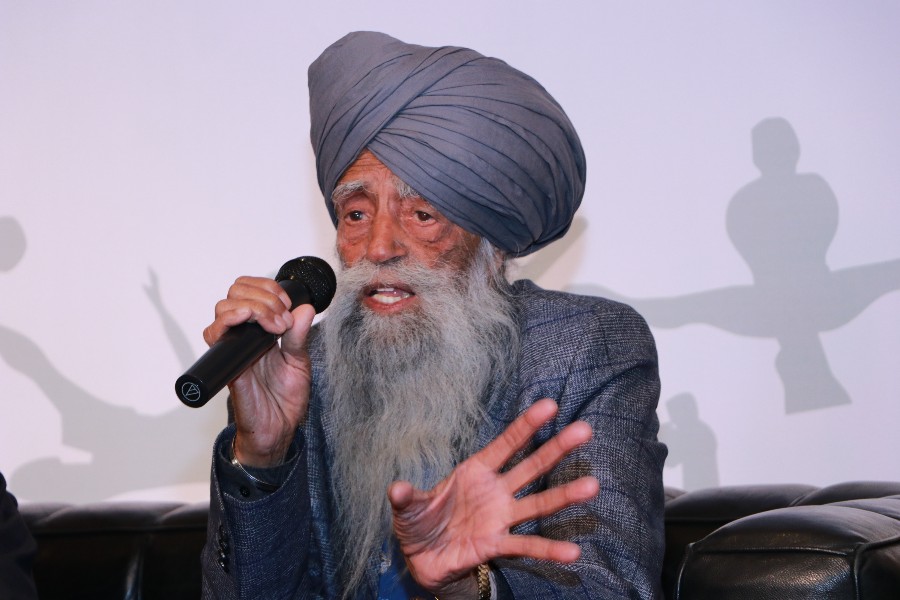 India’s first sports literature festival, Play Write, which is currently being held at The Lalit Hotel, Chandigarh, celebrated the spirit of sports and literature today by presenting thought-provoking sessions on the significance and future of Sports in India.

The first-session of the festival kick-started with boisterous vibes featuring an interesting discussion between British Sikh centenarian marathon runner, Fauja Singh along with the author of his biography, Khushwant Singh and Pavan Khaitan,  on the art of staying fit. The 106-years old athlete who still loves to gorge on ghee-dipped ‘pinnis’ quipped, “I can either run or sleep but, I can never stop. Running is an indispensable part of my life and I wish to contribute in athletics till my last breath.”

The next session was a tête-à-tête between Anupam Mukerji aka Fake IPL Player with Aparshakti Khurana, Radio jockey & actor, on the millennial journey of cricket. It was followed by a deliberation on the future of cricket by Anant Sarkaria, Col. Arvinder Singh, G. Rajaraman & Vijay Lokpally.

Further next was an enticing session titled ‘The World at Your Feet’ which emphasized on football; wherein Ranjit Bajaj, founder of Minerva Football Club & Sukhwant Singh was in conversation with Novy Kapadia. Reminiscing Arjuna Awardee football player, Jarnail Singh Dhillon; Novy Kapadia, author of Barefoot to Boots said, “There has never been an eminent football player like Jarnail Singh in Punjab.”

The discussion further drifted towards the need of starting early in the field of sports. “A major hindrance where India lacks in the sports culture is that our players usually start playing during the age of 12-13 years. However, in order to succeed in sports, the children should start by the age of five years,” said Ranjit.

While delivering the opening address, Vivek Atray, Co-founder of Play Write said, “The idea behind Play Write, 2018 is to pay an ode to sports and the art of literature. Today, we welcome a galaxy of writers and sports persons who have contributed indispensably in their respective fields.”

“We plan to make Play Write an annual affair. This is just the beginning and we look forward to the years to come,” he further added.

Syncing with his thoughts, Chitranjan Agarwal, Chartered Accountant and co-founder of the event said, “It’s great to realize that what started as a simple discussion over a cup of coffee has today transmuted into a reality. I express my gratitude to all the sponsors and everyone who believed in us.”

Play Write, 2018 is being organised under the ambit of the Vibrant Networking Forum and is sponsored by Ethos and Kuantum Papers Ltd.