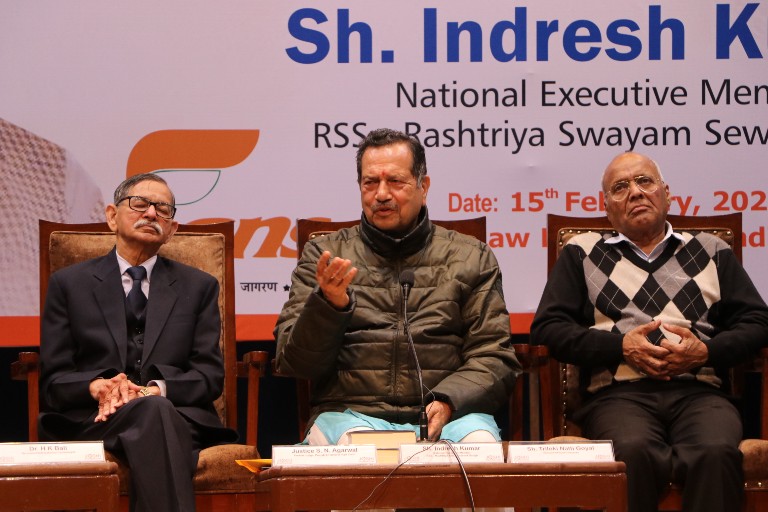 While interacting with the gathering, Sh Indresh Kumar said that those opposing CAA in any form of agitation are driven by selfishness of gaining political mileage. “It’s an ongoing process since 1947, when the nation was divided by the congress. For the political will of becoming Prime Ministers Jawaharlal Nehru and Muhammad Ali Jinnah divided a brotherhood society into India and Pakistan. India for hindus and Pakistan for muslims but there are no questions asked on who signed the agreement on dividing the nation or for what purpose a united nation was divided? Who is responsible for it? But we all are living a lie that we got freedom in 1947, instead we were divided. Those who laid their lives for this freedom were never even given a respectable honour but those who did the blunder for fulfilling their political will get showered by praises,” said Indresh Kumar.

He further added, “The ongoing CAA protest is nothing but mere eyewash for gaining political millage.  Mahatma Gandhi had promoted to bring back our people who have faced atrocities in other countries in order to give them a respectable  place. Thereafter the government lead by Sh Atal Bihari Vajypee promoted the same in 2003 with the support of 24 parties of different regions. During that time orders were passed to every District Magistrate of India to start the process of identifying those who are waiting to get Indian citizenship. But during all these there was no protest then why now?” asked Indresh Kumar. He also questioned the validity of protest in different region despite that the fact that the minorities are already covered. “There is no other country than India which has opened doors for all religions. The CAA is not new but a wave of fear has been spread across the nation. If you are living in a country you bear a social responsibility of serving that country. There is no country in the world which promotes putting ‘mother’ in their name. We here call it ‘Bharat Mata’, because we live with an aim to protect the humanity. Not even a single civilian was killed in surgical strikes or not even a single damage was made to anything by the Indian Army in retaliation to the attacks on Pulwama. Did anyone observe what countries like the USA or Russia does while retaliating…they damage what comes in between. But we changed the world’s perspective on humanity by showcasing respect towards humanity,” said Indresh.

He also urged Sikhs to extend their support to the CAA. “The government has always stood for the betterment of Sikhs and they have immensely contributed in the promotion of India. They should come forward to support the CAA instead of supporting the Khalistan ideology people. Sikhs in Pakistan have faced atrocities, their daughters are forcibly converted into Islam, and they threatened to change the name of the Nankana sahib but what Sikh community in India did? Did they agitate or raised some voice against the atrocities? No I don’t think they did forcefully. They should come forward to save their brothers living in Pakistan, Afghanistan and other countries who are pushed back to atrocities, instead of supporting nefarious political agenda of anti CAA groups,” said Indresh.