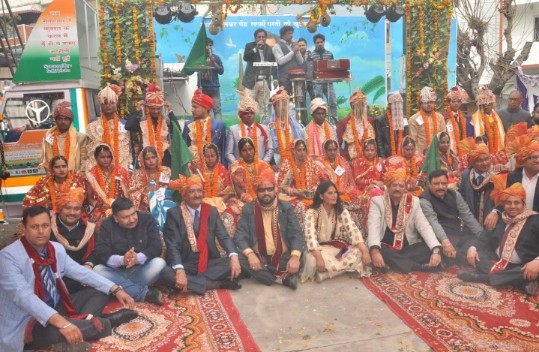 BVP-E’s Project Director Navneet Gaur said, “The mass marriages of needy couples  irrespective of caste creed or religion was held with full grandeur. We welcomed  ‘Baraat’ or the ‘Bride groom party’ , after which breakfast was served,  then marriage rituals took place which was followed by Lunch.”

The newly married couples thanked BVP – E for bearing all costs involved and in organising the mass marriage. The event also witnessed a performance by social worker & owner of Sethi Dhaba Chain – Sonu Sethi & his troupe, from a stage made on an ‘Environmental Van’, conceptualised and developed by Sethi. The van was flagged off by the couples. A plantation drive too was conducted by Sethi, who is also Brand Ambassador of Swach Bharat Campaign of Zirakpur, along-with the newlyweds.

Ashok Goyal, Parishad President said, “With the increasing dowry demand and ostentatious style of marriage celebrations, the daughter’s marriage has become a heavy burden for parents of moderate means. The Parishad therefore selects families who do not have financial means to hold such functions and organises marriages in  the case of  needy families collectively. Hundreds of relatives of from the Bride’s and groom’s side participated in the celebration.”

Bhushan Thakur, Co-ordinator, BVP – E said, “Like previous years this year too, as required under the norms of BVP, all the essential items to start the new household such as double bed, steel trunks, utensils and clothes and others were gifted to each couple for which members of branch and other distinguished residents contributed liberally.”

After the success of this event,  BVP E is now planning to hold a bigger mass marriage, involving many more couples next year.