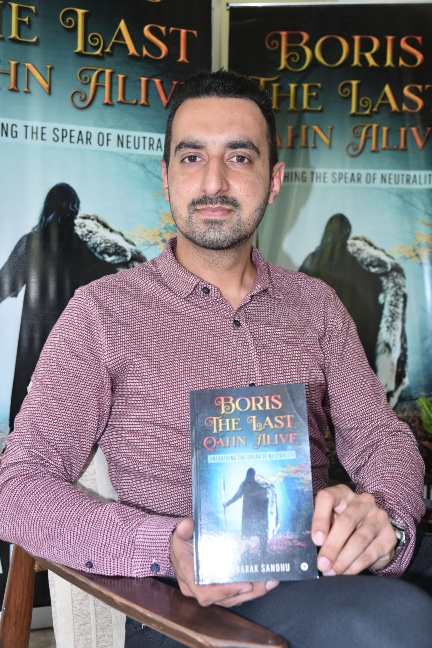 Fiction novels have always surprised the readers with immense imaginative storylines of writers which are otherwise far beyond the scope of reality and general mindsets. A recent entry in the category of fiction novels yet again proves that a writer’s imagination has no boundaries. The title of this book is ‘Boris – The Last Qahn Alive (Unearthing the Spear of Neutrality)’ which has been written by Mr. Mubarak Sandhu and published by Notion Press Pvt. Ltd.

The book was released by Vivek Atray, former IAS, author and motivational speaker here today. It will be available in more than 150 countries as both an eBook and paperback edition.

This fiction-based book narrates the story of Boris, who lives with a group of nomads but belongs to the legendary race of Qahns whose leader, Yura, once sacrificed his own self to save the kingdom and its people when attacked by the ferocious King of Seabed – Crato. Boris, unknowingly, faces the same responsibility, which is to save the Kingdom of Ekaardus during Crato’s next invasion, by killing him with the Spear of Neutrality. What happens later, especially towards the end, is bound to make the readers ponder and wait for the sequel of this book.

The book emphasizes on patience and motivates its readers to find strength in loneliness. A very strong message of victory of good over evil is conveyed through the book, irrespective of time and circumstances. The way a person can leave a mark on others with his truthfulness and insist them to help him even without asking is very well put by the author. The brief poetic conversations of characters work as icing on the cake, making the story more engrossing and tasteful.

From an engineer, to an entrepreneur, to an author – Mubarak Sandhu, a Mohali resident, is a self-made youngster with a very positive approach towards life, which is crystal clear from his blog, www.mubaraksandhu.com. He studied in BDPS Patiala, then graduated as Mechanical Engineer from BBSBEC, Fatehgarh Sahib and eventually settled in Mohali with his family. According to him, the never-ending support of his family and friends encourages him to focus on his goals and work harder each day in order to achieve those targets. He said that he always finds satisfaction in his efforts instead of the results of those efforts, thus yielding happiness even in failures.

Vivek Atray, who is also the author of Finding Success Within, said, “Mubarak Sandhu is a writer with a difference. He has an imagination which is extremely vivid and he has authored a tale which will appeal to dreamy youngsters as well as to grownups. His character creation is particularly unique.”