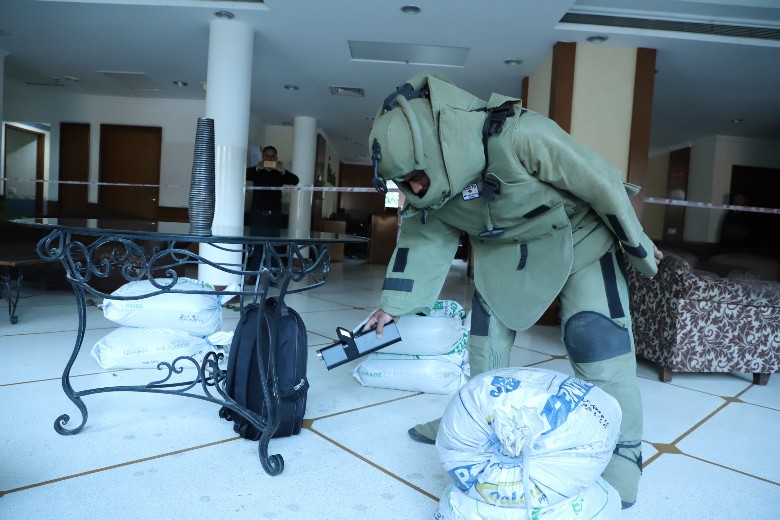 Fortis Hospital Mohali today conducted a Mock Bomb Hoax Drill in association with the Punjab Bomb Detection and Disposal Squad (PBDDS). The drill was conducted as per the international standards of safety preparedness and was focused on safe patient evacuation in case of an emergency.

The drill began around late afternoon with an information of unidentified suspicious bag spotted in Fortis inn waiting area under the table by Fortis Inn staff. After receiving information about the suspicious bag lying in the Hospital, Punjab BDDS team along with the Fortis security and quick reaction team swung into action and carried out a search for an explosive-laden bag planted in the hospital.  Without any panic, all the patients and the staff members from the hospital were successfully evacuated to a safe place.

The whole process of identification and disposal of a bomb was followed under the direction of Chief Security Officer FHM in the presence of Command Nucleus and support team heads.

During the whole exercise, Punjab BDDS team gave the demo on the bomb threat to train the staff and security members to respond spontaneously in such a crisis situation, which made the event more informational.

The exercise was aimed to give staff practical knowledge to react during a crisis and how to respond and retain order and security.

The drill was successfully conducted without any inconvenience, as the patients and attendants were well informed in advance to avoid any panic situation. The drill ended after an hour after declaration of Safe Zone by Chief Security Officer, followed by a briefing with BDDS and Punjab Police.

Hospital staff enthusiastically participated in the fire prevention rehearsal under the instruction and cooperation of PDDS team. This exercise was aimed to train the staff in practical ways to respond during a crisis, and how to navigate out of dangerous areas and retain order and security.

According to Mr. Abhijit Singh,Facility Director, Fortis Hospital Mohali, “As a responsible healthcare organization, we conduct such mock drives regularly and ensure that our entire team is aware of  safety in such a situation and is able to follow laid down safety procedures in case of an emergency.”

Need for a Dedicated Court to take up mental health issues:...