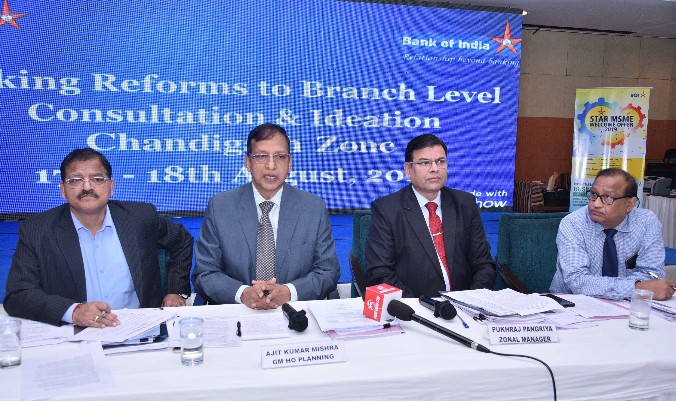 More than 100 branch managers from Chandigarh, Haryana, and Himachal Pradesh attended the bankers meet. The purpose of the meet was to generate ideas and review performance of banks and their alignment with national priorities.

The branches managers were themselves engaged in self-assessment, deliberated on the issues, and evolved ideas on future strategy.  The meet focussed on the ways and means to increase credit to various sectors of the economy with greater IT content to bring about innovation and leverage big data analytics.

Several topical themes such as digital payments, corporate governance in Public Sector Banks (PSBs), credit for MSMEs, retail, agriculture, export credit, establishing financial grid and enabling bank credit towards a $5 Tn economy were discussed during the meet with a view to chalk out specific roadmap for PSBs.

Innovative suggestions as to how PSBs in general, and Bank of India in particular, can play a more effective role in nation building were also taken up. These suggestions were collated and have been sent for further discussions at the state level, along with comparative performance assessment of the branches under each region.

After the State Level Bankers’ Committee level, final consultations will be held at the national level to compare both intra and inter-bank performances, and to finalise the suggestions regarding the way ahead for implementation across PSBs. Post-Bankers Meet, roadmap for the future will be implemented, performance will be improved, and will further align itself to national priorities.