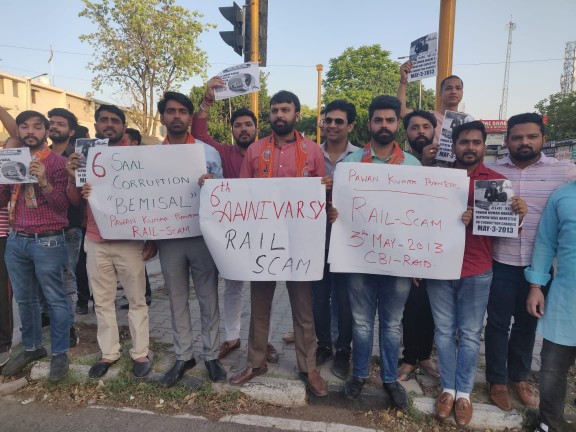 Today on 3rd May state unit of Bhartiya Janta Yuva Morcha along with their State  President Mr Gaurav Goyal celebrated Rail gate scam day in Sector 28 Chandigarh to pay homage to the way Mr. Bansal had handle Railway ministry and allowed corruption to take over. Mr Gaurav Goyal has also set that Pawan Bansal ji should opt the slogan, “We exercise and are known by corruption” “भ्रष्टाचार ही हमारा काम, भ्रष्टाचार ही हमारी पहचान “for their election campaign since Congress is known for its diverse way of conducting corruption.

The state president of Bharatiya Janata Yuva Morcha Mr Gaurav Goyal said  that the way railway ministry was handled by Mr. Bansal  who was said to be in loop for railgate scam in which CBI conducted raids at the offices of Mr Bansal and his nephew Mr Vijay Singla and an amount of rupees 90 lacs was recovered and 10 people were arrested in this case.

Mr Ganesh Jha and Mr Amandeep from BJYM criticized the way Congress and Mr Bansal had carried out large-scale corruption scams during their tenure and looted the public. They said that on this day search Big names and big people were found involved in railgate scam.

Sh. Gaurav Goel also said that the Indian youth dedicates this day to the untiring efforts of Congress and Pawan Bansal to Loot India and unfortunately on this day only a blot found its way to Chandigarh in the form of origin of rail gate scam.

The youth participated in this event in huge numbers in sector 28 to remember 3rd of may as a black day and they resolved to head towards a corruption free India under the efficient leadership of Shri Narendra Modi.