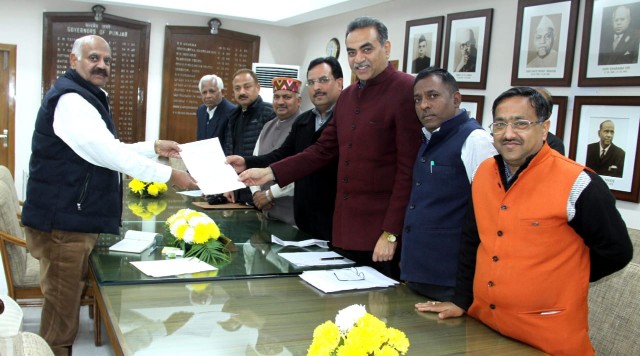 State General Secretary Prem Kaushik informed that the yesterday’s delegation which put forth various issues related to shopkeepers & businessmen and problems faced by them from long time such as construction of first floor of booths and permission of box type construction of showrooms. The Administrator V.P.Singh Badnore asked Advisor Manoj Kumar Parida for early solution of all the issues.

Prem Kaushik said that BJP State President Sanjay Tandon met Advisor Manoj Kumar Parida in this regard and had detailed discussion on these issues.

Sanjay Tandon raised the issue of city villages which were recently merged in the Municipal Corporation, where the officials are now issuing notices to the villagers for already under-construction building and thus creating an atmosphere of fear among the villagers. He demanded that construction should not be stopped of such buildings whose construction started before the merger.

The main problem of workers under the Contractors in Municipal Corporation and Administration was that whenever new Contractor comes, the previous workers are removed and new ones are recruited resulting in their unwarranted abuse. Sometimes it results in issue of contract employee’s bread and butter. Sanjay Tandon demanded Administrator’s intervention for resolving this problem.

Discussing the problems faced by Industrialists, the delegation demanded permission of lease-to-lease transfer of industrial plots. Apart from this, the need based changes in these units be approved. They also demanded permission for construction of additional floor in 5 to 15 Marla plots and permission also be granted for allowing business of heavy industries related to selling of Iron sheets, pipes, etc and subsidiary units.
The inter-departmental transfers of employees under different departments of government are being done from some time. Employees working for long in one department are now being given charge of new assignments, as a result where the employees are being harassed, the working of these departments is also suffering. Employees have filed appeal in the Tribunal and the Tribunal have ordered these inter-departmental transfers as illegal. The delegation requested for following of Punjab Service Rules in the Chandigarh Administration.

Sanjay Tandon said the beneficiaries are facing problems regarding making of cards of Ayushmaan Bharat (Pradhan Mantri Jan Arogya Yojana). He demanded speeding up the work of making cards for beneficiaries and more places be made available for this work.

After listening to all the problems in detail, Advisor Manoj Kumar Parida gave assurance of early redress of all these issues.

“Leaders are not born, they are made” 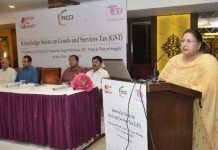 Progressive measures announced in GST in past 3 months have resulted...

Over 1500 St. Stephen’s School Students Took a Pledge to Celebrate...