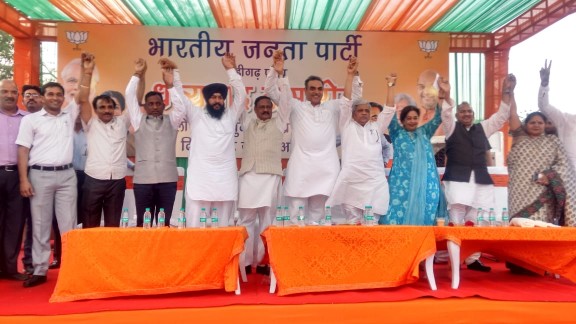 According to Party’s Media in-charge Ravindra Pathania, the event marks BJP’s landmark victory & formation of PM. Narendra Modi led central government. In which All District Presidents, All Morcha Presidents, All Mandal Presidents, Conveners of the departments and cell and hundreds of party workers were present.

Addressing the audience, the National Vice President Prabhat Jha said that the nation has got a non-congress government for a second time in a row and credit for the same goes to the citizens of India and the party members.

In his address, State President Sanjay Tandon said that this win is celebrated as a festival across the country and I am truly thankful to the citizens of India and consider the win as an added responsibility. He further said that the citizens are happy about the inclusive developments in the last 5 yrs and has bestowed upon us the unattainable power as a government. He congratulated the party members and applauded their hard work along with thanking the media for this historic win in Chandigarh.

Speaking on the occasion, MP Kirron Kher expressed gratitude to all the party members and the audience for the victory and said that the victory of Bharatiya Janata Party means a bright future for the country and its economically backward class. She further said that Chandigarh has blessed her once again and has provided her with the opportunity to devote herself for the city. She promises to maintain the trust and work for further development of the city.

“Leaders are not born, they are made”