Punjabis never leave a chance to dance and filmmakers understanding this, always try to put best dance numbers in the movie. This is the reason why these songs have crossed all the borders whether they were geographical or linguistic. This time the makers of Chandigarh-Amritsar-Chandigarh are all set to release the Bhangra song from their upcoming movie, which is titled as ‘Aaja Billo Katthe Nachiye’.

The song is sung by Gippy Grewal. The lyrics of the song are penned down by Ricky Khan. Jatinder Shah has composed the song. The video of the song is quite refreshing and we can see both the leads Gippy Grewal and Sargun Mehta showing their best dance moves. The trailer and the first song of the movie ‘Ambersar De Papad’ have already increased the excitement among the audience about the movie.

About the song, Singer-Actor Gippy Grewal said, “Chandigarh-Amritsar-Chandigarh is one my favorite projects of mine. And as a team, we tried to make sure that every minute detail will be taken care like accent and body language of both the places and Music. I believe music is a very important asset to the film. I am sure that this song ‘Aaja Billo Katthe Nachiye‘ will surely make audiences to dance and will grace every upcoming occasion ”

Directed by Karan R Guliani, the film stars Gippy Grewal, Sargun Mehta in the lead roles. Chandigarh-Amritsar-Chandigarh is a romantic comedy. Naresh Kathooria has written the screenplay and Dialogues of the film. Music and Background score has given by Jatinder Shah. The whole project is produced by Sumit Dutt, Anupama Katkar and Eara Dutt.  The film will bring Sargun Mehta and Gippy Grewal on the screen together for the first time.

Worldwide distribution of the film is done by Munish Sahni’s Omjee Group. The song ‘Aaja Billo Katthe Nachiye‘ has already been released on the Times Music’s official YouTube channel on 11th May 2019. 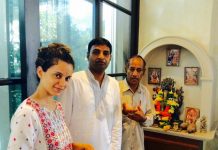 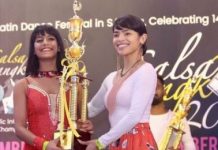