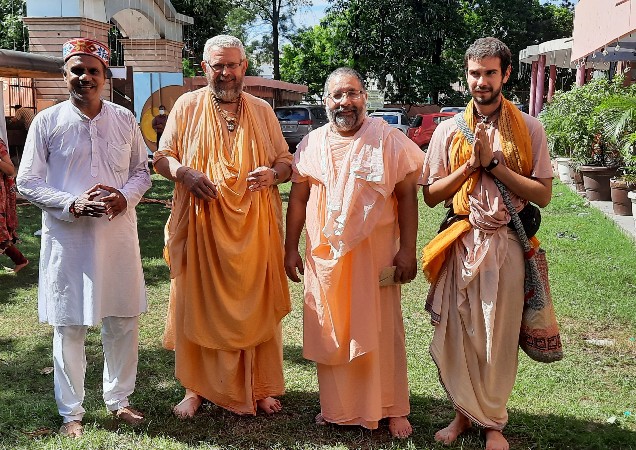 Today Radhashtami Mahamahotsav was celebrated at Sri Chaitanya Gaudiya Math Sector-20 Chandigarh under the leadership of the newly appointed International President of Sri Chaitanya Gaudiya Math Sansthan, Pujyapath Swami Sri Bhaktivichara Vishnu Ji Maharaj with gaiety, zeal and enthusiasm. While meeting the Chandigarh media on the day of Radhashtami, Shri Vishnu Maharaj ji first expressed his views on the situation going on in Afghanistan. He said that whatever is wrong will remain wrong. In the Sanatan Dharm it is considered wrong to kill even an ant, and in Afghanistan, humans are being killed. It is very wrong to inflict such suffering on human beings, whether it is for political reasons or for any other reason. The atrocities being perpetrated on the people by the Talibanis are absolutely wrong.

Devotees from abroad also come on this occasion.  Along with Shri Vishnu Maharaj ji, Parmaditi Maharaj from Germany, Govind Maharaj from America, Madhav Prabhu from Colombia were also present in the press conference.

Math’s spokesperson Jai Prakash Gupta told about the Radhashtami program that in the morning, after the Mangal Aarti, a Sankirtana  was organized in which the  devotees from the country and abroad participated.  Radha Rani’s feet cannot be seen throughout the year, but Radharani’s feet can be seen on Radhashtami. By seeing the feet of Radha Rani, obstacles are removed, wishes are fulfilled and devotion of Lord Krishna is attained. At 12 noon Radha Rani was consecrated with Panchamrit. Thereafter delicious prasad was distributed to hundreds of devotees.

STORY OF INVENTION: Futuristic Safe Injection System-2020 to save the lives...