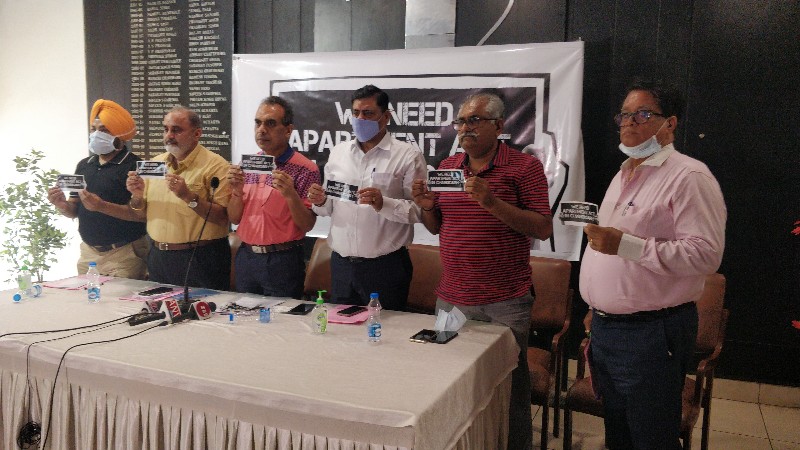 The Resident Welfare Association of Sector-10, Chandigarh has filed a petition in the High Court against Floor Wise Percentage Sale. According to this, the Apartment Act is not implemented in the city.  Property Consultants Association, Chandigarh organized a press conference on this issue at Chandigarh Press Club today in which Association President Kamal Gupta while addressing the media said that Percentage Sale is very important in today’s time because any family member who has got his/her share in  the percentage sale property, can sell it in percentage sale only. He/she can sell that much share and not more than the number of shares he/she owns. Kamal Gupta said that if a person has purchased the property in percentage  from someone else, then he/she will also sell only the percentage.  He raised the question that if a 3-storey house of 10 Marla, in which 3 families live then how does it make the difference whether the tenants or owner is living in the house, and what difference does it make in public utilities/ facilities.

Association General Secretary Jatinder Singh said that Chandigarh has been built for more than 60 years, during which the property was transferred to the next generation, due to the absence of parents, which was divided into 4-5 siblings over time.  If any one of them wants to sell his share, then it is not necessary that any other member of the family should buy it, because some people don’t have money and sometimes one has to sell his/her own shares too. He said that the needs of life keep on changing.  If any brother or sister wants to sell the shares when they are in need, then the buyer if within family will do it arbitrarily.  Apart from this, if any of the families living in the old built houses, if they do not have money or because health issues, or they need to renovate the house then also they cannot demolish the house. In such a situation, if a builder gives a new house according to them and keeps some percentage of the property for himself, then what is bad in it. Along with this, if the elders of the house want to live in their property and along with that want to financially support their children in further higher education or business, then in such a situation if they sell some part of their house in the market, what should be the objection to it?

Chairman Tarlochan Singh Bittu said that on one hand the Government of India talks about affordable housing, while on the other hand it is making life difficult for the common man by bringing such a law in the time of rising inflation.According to him, keeping in view the demand of the time, the government should take decisions keeping in mind the problems and needs of the common man.  He alleged that some rich people who have many houses, many vehicles and are able to take care of themselves, they want to get this decision done as per their wish.
Vice Chairman Sunil Kumar stressed that the need of the hour is to implement the Apartment Act. At the same time, he also said that it would not be wrong to say that the Apartment Act is already in force in the city because the houses of the Housing Board and the flats of the societies are also apartments. Similarly, if we talk about commercial property, then the street/rehri markets of Sector-19, 24, 27, 37, 38, 40 and 41 of the city have also been sold as apartments only. The ground floor of SCO number 51 in Sector-17 has been sold, that too as an apartment.  Talking about industrial property, Elante Mall, Godrej Mall, and many more such malls are where the government has given permission to sell as apartments. Kamal Gupta said that if the government stops the percentage sale, then there is also a possibility of loss of revenue to the government because in the revenue generated through property sale-purchase, a good amount is received in the form of stamp duty and TDS by the government.

Association’s Finance Secretary Manpreet Singh said that if we talk about parking problem, the government needs to work on stilt parking and multi level parking, and not to stop the progress of the country.  There are many houses which are of 1-2 kanals and 7-8 vehicles are parked outside each house because each member of the household has 1 or more cars. Manpreet further said, Chandigarh Administration should learn from the example of Delhi and Haryana that stilt parking is the solution to the problem vehicles.  When this problem was experienced in Delhi, Panchkula and Gurgaon, the government resolved it by enacting a new Apartment Act, which provides for stilt parking and three floors.

Ko
According to Vikram Chopra, the chief media advisor of the Association, if the percentage sale is closed at this stage, then most of the properties in the city will come under the range of litigation, in which the dispute between the co-owners will increase. Some of those cases will also be such in which the government’s involvement will also increase and the government employees will have to go to the courts.  This will put additional burden on the government system.