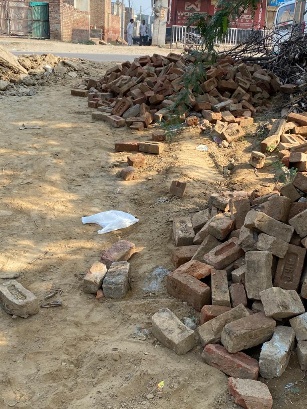 Usha Rani, who after retiring from Haryana Education Department, has  been building a school on her land for the welfare of the people at Baas village in Hisar district of Haryana. It is alleged that a local villager, Jagata son of Sajjana, has been repeatedly obstructing the construction work in lieu of illegal possession. He also instigates others in the village by spreading lies. The truth is that Usha Rani aims to build the school for the upliftment of local children.

She alleged that some miscreants were making efforts to illegally occupy her land and create obstacles in the construction of the school.

Usha Rani has already lodged a complaint with the police and administration also regarding the miscreant, who has a criminal background. His acts are recorded in the CCTV cameras installed in the school. In a recent development, the accused along with some others closed the main gate of the under construction school with bricks and cement poles in a bid to stop the construction work.

It is also reported that Jagata has threatened to kill the construction workers and people related to the school project. Usha Rani has appealed to the police and administration to take immediate action in the matter before some untoward incident takes place and ensure smooth work on the school project.