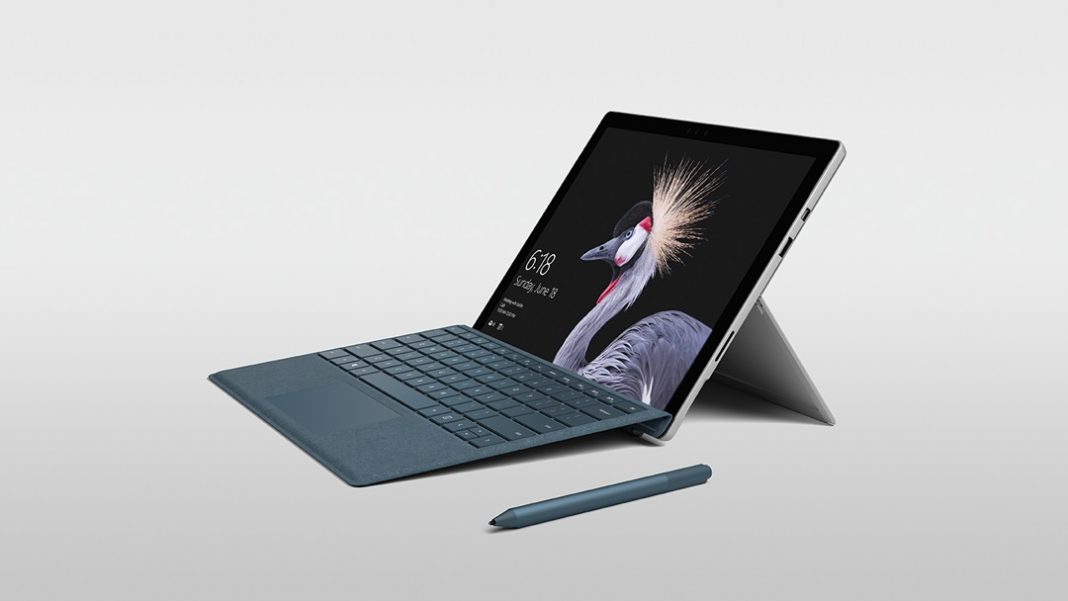 Microsoft Corp. on Tuesdayunveiled the new Surface Pro, the next generation of the iconic product line and the most versatile laptop on the planet. The new Surface Pro delivers the most performance and battery life in a laptop that is this thin, light and quiet. Surface took the category it created and pushed it a step further with the new Surface Pro by bringingup to 13.5 hours of battery life,1making it more than 2.5 times faster than Surface Pro 3, and providing unmatched versatility and mobilityin alighter, more refined design. Surface Pro is not only a powerhouse laptop, but also a mobile creative studio with a vibrant 12.3” PixelSense™ touch display that supports the new Surface Pen,2 the fastest pen ever, and Surface Dial2 both on- and off-screen. Twice as accurate as the previous version and enhanced by our PixelSense Accelerator custom silicon, the new Surface Pen and new Surface Pro together set the industry standard for faster, more fluid writing and drawing,and now Surface Pen supports tilt3 for more natural shading.Inking in applications across Windows 10 and Microsoft Office 365,2 including the new Microsoft Whiteboardapp, will unlock ways for people to use digital ink tobe more creative, collaborativeand productive.

“With Surface Pro we created a new category and challenged the status quo of the laptop,” said Panos Panay, corporate vice president, Microsoft Devices. “With every release since we have continued to push boundaries — redefining the ultimate laptop with Surface Book and making the classic laptop feel fresh again with Surface Laptop. With the introduction of the new Surface Pro we are once again advancing the category by delivering the versatility of a powerhouse laptop and a mobile creative studio in one thin, lightweight device.”

The most versatile laptop

The newSurface Pro has been redesigned from the inside out to give people more performance and50 percent more battery life than the Surface Pro 4. Everything has been streamlined and refined — from softer, rounded edges to cameras built to fade into the bezel.At just 8.5mm thin and starting at 1.69 pounds4 the new Surface Pro is lighter than the bag it will be carried in, andpacks the power of a 7thgeneration Intel® Core™ processor into a new fanless,5whisper-quiet design.

The new Surface Pro will also be available with LTE Advanced later this year to provide even greater mobility to let people work, collaborate and create from anywhere.

The Surface Pro takes the immersive experience of creating on Surface Studio and brings it to life in a highly portable form factor. With a new hinge that adjusts to 165 degrees, people can now put Surface Pro into Studio Mode, creating the optimal position to write or sketch. The high-resolution 12.3” PixelSense™ Display is engineered to work with the new Surface Pen, the fastest digital pen ever, to deliver an amazing inking experience. When used with the new Surface Pro, the new Surface Pen is twice as responsive as the previous versionwith4,096 levels of pressure sensitivity for increased accuracy and responsiveness. New tilt functionality detects the angle of the SurfacePen to enable more natural shading. The Surface Dial also works on-screen with the new Surface Pro, unlocking a set of unique experiences pioneered by Surface Studio. Placing Dial on the screen brings up app-specific digital tools, allowing people to quickly access shortcuts and move seamlessly through their workflow.

Microsoft Store is also offering custom device fittings to help people find the Surface that’s right for them. Knowledgeable associates are committed to helping people match their needs to the right Surface, then set it up and assist with customization, including the applications people use every day like Office.

With the new Surface Pro and Surface Pen, digital inking comes to life for artists and inspires creativity worldwide. But people use pens not just to sketch or paint, but also to be productive—write and share comments in documents, notes in notebooks, and sketches on whiteboards.We are making the creative power of the new Surface Pen available in the world’s most powerful productivity suite: Microsoft Office.

New inking features in Microsoft Word, Excel and PowerPoint include a customizable gallery of your favorite pens, pencils and highlighters that roam with you as a personalized setting across Office apps and devices, along with support for tilt and shading with the new Surface Pen. These capabilities will begin to release to Office 365 subscribers in June, including the more than 100 million monthly active commercial users and 26 million consumer subscribers.

Additional inking experiences will continue to roll out in the future, including the new Microsoft Whiteboard app, which offers a limitless canvas for creativity and collaboration with simultaneous inking between multiple people across the world. With Microsoft Whiteboard, people will be able to collaborate on ideas and projects across an expanded set of ink-enabled Windows 10 devices later this year, with exclusive capabilities for Office 365 subscribers.

Surface Studio, first introduced in October 2016, isa new class of device built totransform from a workstation into a powerful digital canvas, unlocking a more natural and immersive way to create on the thinnest LCD monitor ever built.6Surface Studio will launch inAustria, China, Denmark, Finland, France, Germany, Hong Kong, the Netherlands, Norway, Sweden, Switzerland and the United Kingdom.Surface Studio will be available for preorder starting today at microsoft.com and select third-party retailers, and will begin shipping in these markets on June 15, 2017.

Microsoft (Nasdaq “MSFT” @microsoft) is the leading platform and productivity company for the mobile-first, cloud-first world, and its mission is to empower every person and every organization on the planet to achieve more.