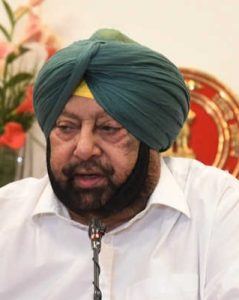 With the state reeling under an unprecedented power shortage amid extreme temperatures, Punjab Chief Minister Captain Amarinder Singh on Thursday ordered curtailment in timings of state government offices from tomorrow, and cutting down of power supply to high energy consuming industries with immediate effect, to save crops and ease the domestic power situation.

He also appealed to all government offices to make judicious use of electricity in government offices, adding that the situation was dire as the peak demand in the state had touched a whopping 14500 MW. So far, there is no decision on ban on use of ACs in government offices, which will function from 8 a.m. to 2 p.m. till further orders, an official spokesperson said after the meeting.
The Chief Minister also urged the agitating Power Department employees to call off their stir, which has aggravated the crisis, with complaints of breakdowns resulting from overloading of feeders and sub-stations not being address promptly.
Reviewing the situation at a high-level meeting, the Chief Minister constituted a three-member committee, comprising Additional Chief Secretary – Development, CMD – PSPCL and Special Secretary Finance, to resolve the grievances of the agitating employees. He assured the employees that all their genuine demands will be duly considered for appropriate action. He pointed out that many of the demands of the employees, such as increase in employee NPS share, restoration of Generation Incentive etc. had already been conceded, and the 6th Pay scales were also being implemented by various Boards/Corporations of the State.

The Chief Minister urged the employees to withdraw their agitation in the interest of the state’s agriculture and industry, as well as the domestic consumers who were facing a difficult time due to prolonged power outages amid the Covid pandemic.
Pointing out that the farmers were losing precious paddy transplantation time due to the power breakdowns, the Chief Minister made it clear that the agriculture sector needed to be prioritized for uninterrupted power supply.

He reiterated his government’s commitment to ensuring regular supply of power at subsidized rates to the state’s Agricultural, Domestic and Industrial consumers.