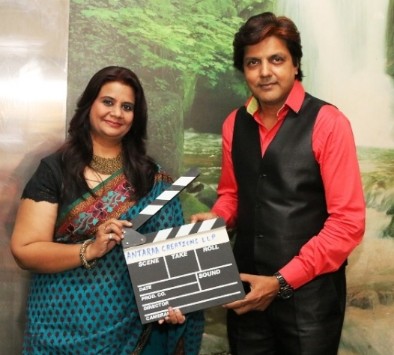 Many successful actors from all the four corners always look forward to contribute towards cinema on a larger scale. Many actors have ventured into producing creative cinema. After winning millions hearts with his acting on television and celluloid, Neeraj Bharadwaj has forayed into film production too. Collaborating with artistic lady Sweta Thakore under the banner of Antaraa Creations LLP, a Hindi untitled suspense thriller, tentatively titled as “Production No.1” was launched on Vasant Panchami day – a day centered on Goddess of Wisdom – Goddess Sarawati who embodies the different facets of learning such as sciences, arts, crafts and skills. The film marked the beginning with the song recording at Krishna Studios, Goregaon (West), Mumbai with a grand mahurat on 22nd January 2018.

Pawni Pandey and Gufi rendered a vibrant item number “Mera Hukka Bada Ajooba Hai, Gud Gud Bole….” under the supervision of veteran music director Baba Jagirdar. Pawni Pandey, the finalist on Sa Re Ga Ma Pa L’il Champs and singing reality show Indian Idol has sung diverse number of songs in Bollywood and is a live performer too. She became well-known after her sung song “Laila Main Laila….” from “Raees” became hit. The film is directed by Manoj Singh. He hails from Gaya in Bihar. He has assisted veteran directors like Kalpataru, T. Rama Rao, Afzal Khan, etc. He has directed thousand episodes of television serials too. Bidita Bag who featured in critically acclaimed Hindi film “Babumoshai Bandookbaaz” plays the lead. The model-turned-actress from West Bengal is mostly known for her inclination towards socio-political films and has featured in many Bengali films like “Mukti”, “Icche”, “Kagojer Nouka”, “Sangabora” amongst others.

Television famed actor Neeraj Bharadwaj known for his expressive role as ‘Chirag Modi’ in ‘Saath Nibhana Saathiya’ including his TV serials likeEhsaas, Jaaye Kahan?, Kaanch Ke Rishtey, Bandhan Kachche Dhaagon Ka  amongst others including many Hindi and Bhojpuri films. He joins hands with Sweta Thakore for ventures into film production. Neeraj Bharadwaj says, “We know each other since long and always had the desire of making a creative and sensible film. This is our first step towards the celluloid world in the form of thriller. Together we are putting our full effort to make a grand entertainer. Right now we are keeping our fingers crossed and doing our level best.”

Sweta Thakore hails from Rajkot in Gujarat. She is a resident of Mumbai and a teacher in the primary school in Juhu. Excited about her maiden Hindi film venture, “It is basically a woman-oriented film. It is about an intelligent lady ‘Maya’. It is a transition of a woman from Moksh to Maya to Mohini.” She further adds, “Apart from this item number being recorded the film will have three more songs. We will commence the shooting in Alwar (Rajasthan) and complete it in a 30-days shooting spell. We will be shooting in actual locales. Director Manoj Singh is a veteran and good technician and has scheduled the film accordingly within the budget.”

The story, screenplay and dialogue is written by Kapil Sharma, cinematography by Dharam Vishwas, choreography by Ricky Gupta, action by Ramakant Mishra and sound by Pramod Vishwakarma in its major credits. Krishnajee is the co-producer of this film.

Gurmeet Choudhary gets emotional at the trailer launch of PALTAN!