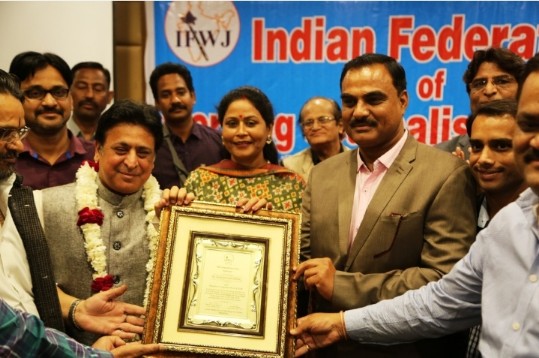 ‘Indian Federation of Working Journalists-Rajasthan’ in Rajasthan honored actor-producer Aushim Khetarpal of Hindi film “Shirdi Saibaba” fame with ‘Rajasthan Integration Award’ for his new Hindi film “Baba Ramsaa Peer” on Saturday, 24 February 2018 in Jaipur. On the occasion, cabinet minister of Rajasthan, Shri Prabhu Lal Saini, who is also the minister of agriculture and animal husbandry, Ms. Suman Sharma – chairperson of the Rajasthan State Commission for Women, MP of Jaipur Shri Ramcharan Bohra, Shri Upendra Singh Rathore – State President of ‘Indian Federation of Working Journalists’ with many senior journalist and correspondents made their presence felt.
Aushim Khetarpal who hosted a press conference at Hotel Juhu Plaza in Mumbai on Tuesday, 27th February 2018, shared this information with the media personals. The famous and popular producer-actor of “Shirdi Saibaba” has now produced a film on Sant Baba Ramsaa Peer of Rajasthan, who had miraculous powers and devoted his life for the upliftment of dalits, downtrodden and poor people of the society. Khetarpal said that the film is based on communal integration and is titled as ‘Baba Ramsaa Peer’ was successfully released in January 2018 at 235 cinema halls all over and has been appreciated. The film is still running in many theatres.
Aushim Khetarpal essays the role of Baba Ramsaa Peer. Veteran actress Gracy Singh is seen in the female lead. On being honored with the Rajasthan Integration Award, Aushim Khetarpal said, “I am thankful to all who has stood by me in my journey. I am also grateful to the jury members and the audience who made me win this coveted award.” He further adds, “These days we do not give much time and attention to the generation next. Thus there is a lack of values on culture and civilization. We filmmakers should make such kind of films which will educate the younger generation. I will try making such kind of films in the near future too.