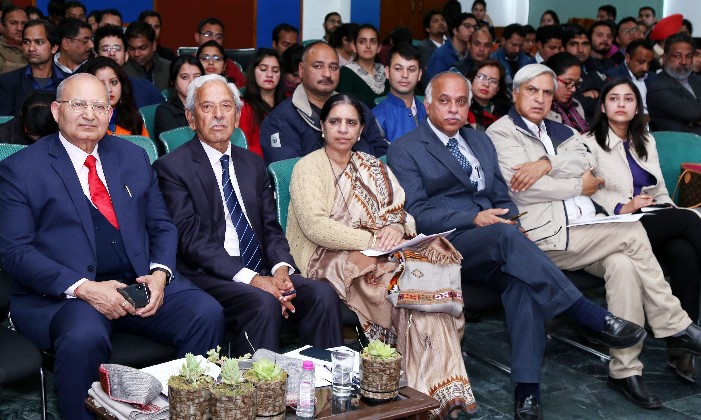 Himachal-based Shoolini University which now figures among the top five universities in the country to file patents, has resolved to encourage research and be the number one among all institutions in the country in the field of patents.

The Faculty and students of the University have so far filed 270 patents and has set the target to file 300 patents by the end of March. Filing patents involves preliminary investigations by authorised agencies into the exclusivity and viability of the patents filed.

Talking to media here on Tuesday, Vice Chancellor Prof PK Khosla said the university was already on the right track as it has an ‘H’ index of 44 in terms of citation. He said the two-day workshop, which was attended by top luminaries from across the country, discussed about how to raise the standards of research in the next three years.

He said the university conducted a two-day workshop on Intellectual Property Rights (IPR) and Research and Development (R and D) to discuss the ways to achieve it target to be among the top 200 global universities of the world by 2022.

The Chief Guest and Guest of Honour for the opening day was Dr. A Mukhopadhyay from Department of Science and Technology, Delhi and Mr. D C Rana, Member Secretary, HIMCOSTE.

Prof Khosla said in order to increase the number of granted patents, we should identify 10 patents for examination and for these the codal formalities need to be done on priority bases.

He also said that to enhance the visibility and perception in global and national ranking, we should strengthen the commercialisation part. Earlier the welcome Address was delivered by Dr. Reena V Saini, IPR Cell Coordinator, Shoolini University.

The second session focused on the Research, development and other parameters vis-a-vis the plan to reach global standards in the next three years. Dr. RS Paroda, Former DG of ICAR, Dr. RC Mahajan, Emeritus Prof., PGI, Chandigarh, Dr. A Mukhopadhyay, department of science and technology, Delhi, Dr. Suman Bala Beri of Panjab University were the chairpersons of the event.

The session was based on the comparison between NIRF rankings and the international rankings and why the Times Higher Education Ranking System suits Shoolini. Also, the detailed methodology of all the three ranking systems were discussed. The chairperson for the session was Dr. RC Mahajan and the co-chairperson was Dr. Anuradha Sourirajan.

The major highlight of this session were the three major points that needs to be kept in mind for the next three years i.e. perception, research and income of industry.