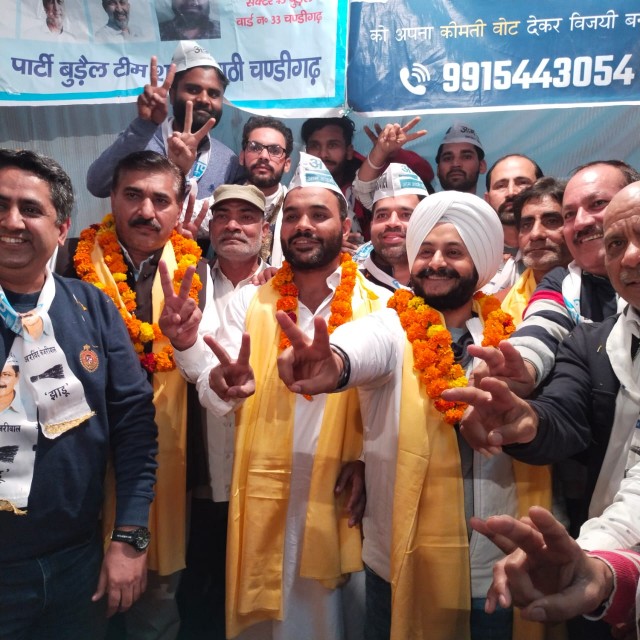 In the municipal elections, Aam Aadmi Party (AAP) candidates are  advocating the idea of implementing the Delhi model in Chandigarh as well. In line with Arvind Kejriwal’s promise, AAP candidates are making promises related to improving the condition of electricity, water and sanitation to voters in their respective wards, including supply of 20,000 liters of free clean drinking water to every household every month, installation of CCTV cameras in public places and ensuring cleanliness and safety etc.

AAP candidate from Ward No 33 (Burail) Shadab Rathi today inaugurated the election office of the party and took out a padyatra. On this occasion, in-charge of AAP Punjab and Chandigarh, Jarnail Singh was also present. The inauguration ceremony took place at the Oberoi Hotel, Sector 45.

Sardar JJ Singh, AAP candidate from Ward 35, visited the Bankers’ Society of Sector 50 and went door-to-door requesting for votes and support for himself. He also went to Kendriya Vihar Society of Sector 48. He interacted with the residents of the society.

Jasbir Singh Ladi, AAP candidate from Ward 21, visited the local Leprosy Ashram today and met the head of the place. Referring to the development works being done in Delhi, he talked about providing similar facilities in Chandigarh also.

All these candidates while talking to the people reiterated that if they win the elections, they will leave no stone unturned to rejuvenate the government hospitals and government schools in the area. To improve their functioning, promised to make reforms on the lines of Delhi. Citizens get 24-hour free treatment at Mohalla Clinics in Delhi. Almost the same model was said to be implemented in the government hospital.