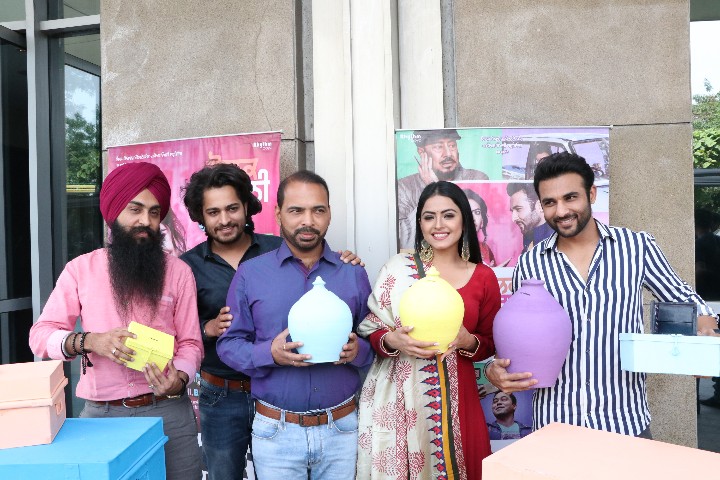 A Packet full of Love, full on comedy & drama will be available in upcoming Punjabi movie “Golak Bugni Bank Te Batua”, this film brings out the best of the performances in the Punjab film industry. As before, Rhythm Boyz Entertainment along with Hayre Omjee Studios are ready to release its next film with a bang on 13th April, 2018. The film has been made under the banners of , Rhythm Boyz Entertainment along with Hayer Omjee Studios, its producers are Karaj Gill, Talwinder Hayre. The film stars, the renowned and versatile actor Amrinder Gill, Harish Verma, Simmi Chahal, BN Sharma, Anita Devgan, Jaswinder Bhalla and Gurshabad. The well known director Ksshitij Chaudhary has directed the film. The film will be released worldwide by Omjee Group. The film and its screen play has been written by Dheeraj Rattan, the dialogues have been written by Rakesh Dhawan and Surmeet Maavi. The Co-Producers of the film are Amiek Virk, Jaspal Sandhu and Munish Sahni.

The team of the film was in town today for its promotions and to talk about it. The Director, Kssihitj Chaudhary said, “We will not be able to reveal the story at this moment but this is an assurance that this film is surely going to leave a mark in the comic cinema with an important message of course”.

The lead actor Harish Verma, said, “It is an unusual script, the character is quite close to the real life and this will be another platform for me to show my real self”.

The lead actress, Simmi Chahal also added, “This film actually carries a good story line, I am very happy to be associated with this project & looking forward for something good in Punjabi cinema”.

The Producers, Karaj Gill and Talwinder Hayre further added, “We are happy and enthusiastic to make a film which is actually so much close to the hard core fact and truth of the society with an important message”.

The music of the film has been composed by renowned and famous Music Director Jatinder Shah. There are seven songs in the film for which the lyrics have been penned down by Happy Raikoti, Bir Singh, Harmanjeet, Sabir Ali Sabir, Bikk Dhillon and Sidhu Sarabjit. We will hear the soulful and melodious voices of Amrinder Gill, Sunidhi Chauhan, Bir Singh, Gurshabad, Gurpreet Maan and Bikk Dhillon.