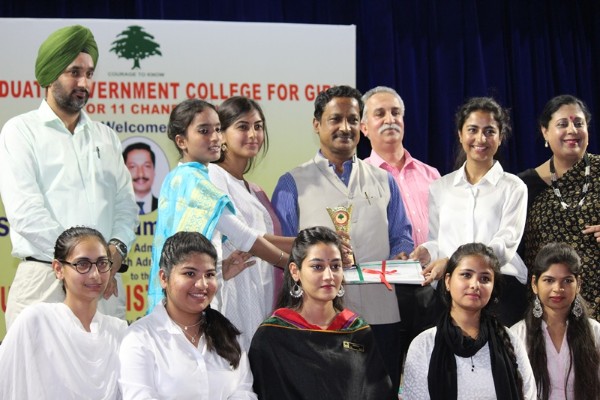 The Chief-guest, other dignitaries and Principal of the college lighted the ceremonial lamp which was followed by invocation of Goddess Saraswati by the students. Amidst applause by the audience, more than 600 meritorious students were honoured with trophies and prizes for their outstanding and distinctive performance in the field of academics, sports and extra-curricular activities.

The College Annual Report was presented by the Principal wherein she highlighted the glorious achievements of the students in the fields of academics, extra-curricular activities and sports at the university, inter-university, state, national and international levels. She also underlined the contribution of faculty as members of Academic Bodies of Panjab University and highlighted their endeavors in research and publications. Enlisting the glorious progress made during the last session, she highlighted that the college won the Best Maintained Campus Award in the Rose Festival, 2019.

Enumerating the infrastructural developments she mentioned that the college is first of its kind in the city to have a Solid Waste Management Plant; Multimedia Centre is under construction; construction of Research Block has been approved; Academic Block has been renovated to house IQAC/UGC Cell, Placement Cell and a Data Resource Centre. The fourth hostel with a capacity of more than 400 residents will be functional in the next session. The Principal proudly announced that the college has been selected by Ministry of HRD, Govt. of India to establish an Institution Innovation Council. Thus, it has carved a niche not only in the region but also in the country.
Chief Guest congratulated and gave away the prizes to the students who excelled in academics, sports and extra-curricular activities. Lauding the multidimensional achievements of the institution, Shri Manoj Kumar Parida observed that women are better than men in all respects as they are divinely designed for multi-tasking. They are the ones who can break the glass-ceiling. He motivated them to be innovative, think out of the box, aim higher, realize their dreams and bring laurels to the city and institution.