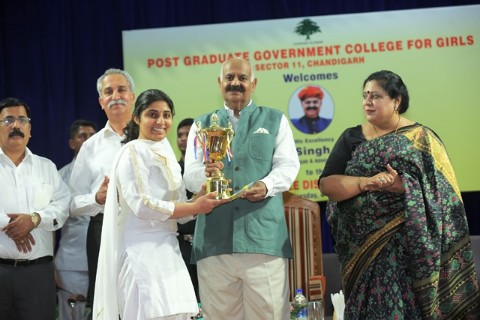 The 62nd Annual Prize Distribution Function of Post-Graduate Govt. College for Girls, Sector-11, Chandigarh was held today. His Excellency Shri V.P. Singh Badnore, Hon’ble Governor of Punjab and Administrator, U.T., Chandigarh, graced the occasion as Chief Guest of the function. Amidst applause by the audience, meritorious students were honoured with trophies and prizes for their outstanding and distinctive performance in the field of academics and co-curricular activities. The Chief-Guest, Sh. B.L. Sharma, IAS, Secretary Education UT, Sh. R.K. Popli, Director Higher Education, U.T. and Principal of the college lighted the ceremonial lamp which was followed by invocation of Goddess Saraswati by the students.

Welcoming the Chief Guest Prof. Anita Kaushal, Principal of the college, proudly announced that the college has been ranked 68th in the country and stands first in the region as per NIRF-2018 ranking of colleges declared by Minister of MHRD Sh. Prakash Javdekar yesterday. Earlier the college had been reaccredited with ‘A’ Grade by NAAC with a CGPA of 3.52 and was adjudged 6th at the national level in Swatchta ranking. The college has also been selected to be a co-partner with Government of India in the Unnat Bharat Abhiyan. Thus the institution has carved a niche not only in the region but also in the country. The Principal presented the College Annual Report and highlighted the glorious achievements of the students in the fields of academics, extra-curricular activities and sports at the university, inter-university, state, national and international levels. She also highlighted the academic achievements of the faculty at National and International level.

Congratulating the winners, His Excellency Shri V.P. Singh Badnore lauded the multidimensional achievements of the institution and defined the PGGCG-11 as ‘Women Empowerment at its brilliant best’. He advised the students to maintain an adequate balance between Intelligence Quotient and Emotional Quotient in order to soar to unimaginable heights. He motivated them to focus on research and skill building, and be a part of constructive innovation.