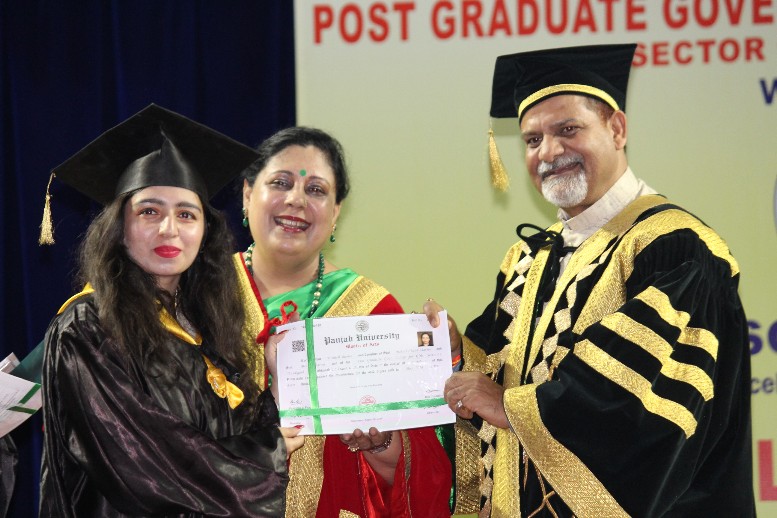 The 62nd Annual Convocation of Post Graduate Government College for Girls, Sec-11, Chandigarh, was held today. Professor Raj Kumar, Vice Chancellor, Panjab University, Chandigarh, was the Chief Guest on the occasion. The Convocation was inaugurated by lighting of the Ceremonial Lamp by the Chief Guest and Principal Prof. Anita Kaushal which was followed by rendition of Saraswati Vandana by the students.

Prof. Anita Kaushal, Principal of the college presented the College Annual Report and outlined the illustrious achievements of the students in academics, co-curricular activities and sports. She also underlined the contribution of Faculty as members of Academic Bodies of Panjab University and highlighted their endeavors in research and publications. Enlisting the glorious progress made during the last session, she highlighted that the college won the Best Maintained Campus Award in the Rose Festival, 2019. Enumerating the infrastructural developments she mentioned that the college is first of its kind in the city to have a Solid Waste Management Plant; Multimedia Centre is under construction; construction of Research Block has been approved; Academic Block has been renovated to house IQAC/UGC Cell, Placement Cell and a Data Resource Centre. The fourth hostel with a capacity of more than 400 residents will be functional in the next session. The Principal proudly announced that the college has been selected by Ministry of HRD, Govt. of India to establish an Institution Innovation Council. Thus, it has carved a niche not only in the region but also in the country.

Congratulating the Graduates and Post-Graduates in his Convocation Address, Prof Raj Kumar complemented them for being a part of the best institution of the region which has made its presence felt at the national and global level. He stressed that in todays scenario one should aim at being a job provider rather than a job seeker, and be an able ambassador of the institution. He guided the students that the college has enabled them and made them competent, now it was a time to payback their alma mater.