The 61st Annual Prize Distribution Function of Post-Graduate Govt. College for Girls, Sector-11, Chandigarh was held today. Hon’ble Ms. Justice Ritu Bahri, Punjab and Haryana High Court graced the occasion as Chief Guest of the function. Amidst applause by the audience, more than 600 meritorious students were honoured with trophies and prizes for their outstanding and distinctive performance in the field of academics and co-curricular activities. The Chief-guest and Principal of the college lighted the ceremonial lamp which was followed by invocation of Goddess Saraswati by the students.

Welcoming the Chief Guest Prof. Anita Kaushal, Principal of the college, proudly highlighted that Hon’ble Justice Ms. Bahri is an Alumna of the college. She motivated the students to emulate her as their Role Model so that they too can grace their Alma Mater as Chief Guest in future. The Principal presented the College Annual Report and highlighted the glorious achievements of the students in the fields of academics, extra-curricular activities and sports at the university, inter-university, state, national and international levels. She said that the college has emerged as one of the pioneer institution in the region and has been reaccredited with ‘A’ Grade by NAAC for its outstanding overall achievements. She also highlighted the academic achievements of the faculty at National and International level. 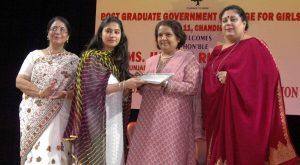 Chief Guest gave away the prizes to the students who excelled in academics, sports and extra-curricular activities. Congratulating the winners, Justice Ms. Bahri lauded the multidimensional achievements of the institution which speaks volume of the commitment, dedication and sincerity of the Principal, faculty and students. Becoming nostalgic and recalling her college days, she observed a sea change in the college courses and infrastructure. The achievers have made their parents and their institution proud. She stressed that the achievers should share and give back to the society. It can be sharing of toys, sharing of blood or simply sharing of happiness and compassion. In present times, it is important to excel irrespective of the stream you pursue. She motivated them to be confident, dream the best, work hard and success will automatically follow.

Dr. Rama Arora, Dean of the college proposed the vote of thanks.

More than 600 prizes were awarded to the students in various categories.

Focus more on mistakes rather than only strong concepts: Neel Aryan...