The 60th Annual Convocation of Post Graduate Government College for Girls, Sec-11, Chandigarh was held today. Prof. (Dr.) R. K. Kohli, Vice Chancellor, Central University of Punjab, Bathinda, was the Chief Guest on the occasion. The Convocation was inaugurated by lighting of the Ceremonial Lamp by the Chief Guest and Principal Prof. Anita Kaushal which was followed by rendition of Saraswati Vandana by the students.

Prof. Anita Kaushal, Principal of the College presented the College Annual Report and highlighted the illustrious achievements of the students in academics. Enlisting the glorious progress made during the last session, she highlighted that three new courses at PG Level; MA (Fine Arts), M.Com. & M.Sc.-IT, and a career oriented Elective Subject of Fashion Designing at UG level will be introduced in the next session. She also mentioned various infrastructural additions such as new hostel with a capacity of 400 residents nearing completion, Colorful Mural and an ultra-modern Seminar Room to name a few.

Congratulating the Graduates and Post-Graduates in his Convocation Address, Dr. Kohli observed that they must take pride in the fact that they have been the students of one of the best institution of the country and they should now be role models for others. He motivated them to stand and fight exploitation and also preserve the dignity of others. He stressed that being educated they have entered a new phase of their lives and it is their responsibility to pay back to the society and nation. Emphasizing misuse, overuse and wastage of resources, Dr. Kohli motivated the students to conserve and maintain the resources by not repeating the mistakes committed by earlier generations. 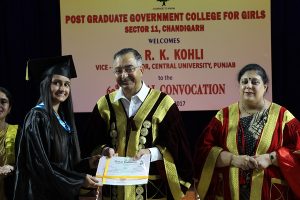 Students of the college who secured positions in the Panjab University Examination were felicitated on the occasion. 7 students who stood first in the Panjab University examinations were awarded Medals, and 13 were decorated with Roll of Honour by the Chief Guest for their outstanding academic performance. The recipients of Roll of Honour are:Yumlembam Chinglembi for M.A. Dance; Nitika for M.A. Music Vocal; Sonia for M.A. Public Administration; Shally Jain and Shyna Bhalla for M.Sc. Botany; Shallu Uppal and Surbhi Chawla for M.Sc. Zoology; Ravati for B.A. Hindi Honours; Diksha for B.A. Sanskrit Honours; Preeti Yadav for B.A. Geography Honours; Mehak Mehra for B.A. Psychology Honours; and Punit Karwal for B.A. Psychology Honours and B.A. Pass Course.

VIRASAT 2017 : A Cultural Extravaganza at GGDSD...