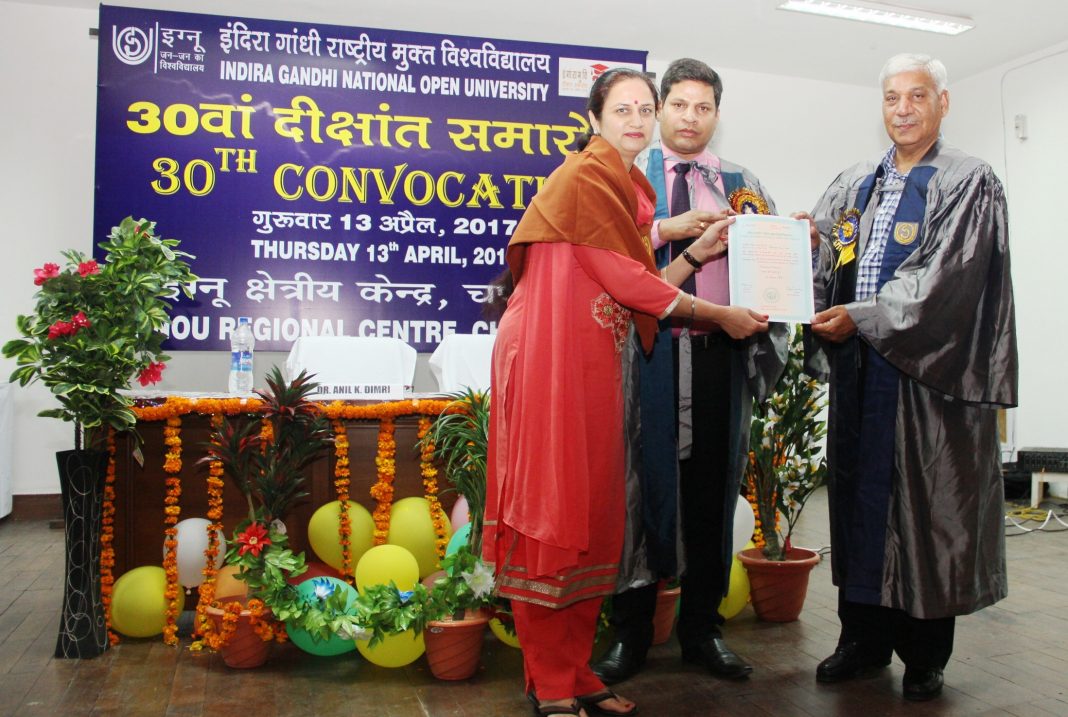 Chandigarh,
13 April 2017
Kulbir singh kalsi
The 30th Convocation of IGNOU was held today on 13th April, 2017 (Thrusday) at IGNOU, Hqrs New Delhi and its 56 Regional Centre simultaneously. The Convocation of IGNOU, Regional Centre Chandigarh was held at the auditorium of University School of Open Learning (USOL), Panjab University, Chandigarh. Hon’ble Prof. Rupinder Tewari, Coordinator, Centre for Microbial Biotechnology, Panjab University, Chandigarh presided over the function by delivering the convocation address and awarded Degrees/Diplomas to 547 students of Master Degree and Professional Bachelor Degree. In the convocation 1399 successful learners were awarded Degree & Diploma. In the previous convocation 1135 students were awarded degree
Mr. Snagam Jha student of Advance Diploma in Relating (ADIR) was awarded gold medal in the main function held at IGNOU, Hqrs. New Delhi.
At the outset, Chief Guest lighted the lamp on the stage. Thereafter, Dr. Anil K. Dimri, Regional Director presented the annual report of the Regional Centre. In his report he mentioned that with a network of 30 Study Centres under Chandigarh Region IGNOU, admits more than 9000 students per year and during the academic session 2016-17 the total student strength was 9197 registering an increase of 23.29 per cent over last year. He also shared that 26 students from this region have received their Degree with distinction and 751 learners with 1st Division. It is interesting to note that about 80% students of this region have secured 1st division in their programmes of studies. Among the degree recipient 552 (39.46%) are female and about 21.61% from the rural area. Dr. Dimri, highlighted the activities of the Centre and advised the students to take advantages of Open & Distance Learning based education, as this is cost effective and accessible to the common people. Dr. Dimri also shared that IGNOU, Regional Centre Chandigarh also participated in Government of India mission of “Cashless India” after demonetization of currency, with the help of its learners who were called e- kranti volunteers and local study centre. This awareness campaign was conductedin the Morni Blocks District Panchkula where approximately, 450 households were covered under this awareness drive. He also emphasized that IGNOU, Regional Centre Chandigarh is making sincere efforts to procure land for Regional Centre building for construction of its campus.

Chief Guest Prof. Rupinder Tewari awarded the Degrees and Diplomas to 547 successful learners of IGNOU. In his convocation address, he told about the role of Open & Distance Learning system in the present context and emphasized that our youths should come forward to take the advantage of the system. Prof. Tewari highlighted greatest hallmarks of IGNOU which is lacking in Conventional University system is the considerable degree of flexibility in entry qualification, place, pace, lateral entry and exit points and duration of study to students. He also pointed out that conventional education system miserably fall short of meeting this ever rising demand of higher education because of the inherent limitations of restricted intake. What is the way forward? Open Distance Learning (ODL) is the answer. The potential of this mode of education was realized long ago and a separate Department of Distance Education as part of the conventional university system became a reality. This becomes evident from the fact that as soon as they severed their umbilical cord from the Conventional Universities, they flourished and blossomed to become the hub of learner’s activities. The country realized the need and potential of the distance learning as a viable, sustainable and cost-effective recipe to cope with the mounting pressure of higher education. He also advised the learners to not violate the basic matrix ofmorality, values of honour, dignity, friendship, social well-being and compassion towards fellow men. No idea or prescription can be above the conscience of humankind. Your prime mission is to serve your family, your fellow men, the society and the country. You could be a good professional only if you are good human being. These are the gospels of truth which make your life sublime and serene.
Principal’s of different Degree Colleges of Chandigarh, Coordinators of IGNOU, Study Centre Staff, Academic Counsellors, and other Guests were present on this occasion. The programme was also attended by Dr. Savita Panwar, Asstt. Regional Director, Sh. Ram Kishan, Asstt. Registrar and other staff of the Regional Centre.The programme was anchored by Dr. Savita Panwar who also offered vote of thanks.