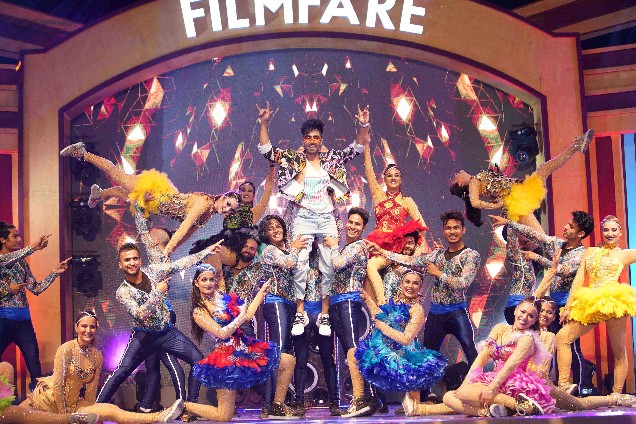 After honoring the Best of Bollywood for 62 years The Black Lady – Filmfare Awards made its debut in the Punjabi Industry last year. On March 23rd, 2018, this annual event came back to Punjab for its second year. It was back with a bigger and better bang. Once again the who’s-who of Pollywood got together to celebrate the best of Punjabi cinema and the event turned into a historical night.
The 2nd Jio Filmfare Awards Punjabi kickstarted with a tribute to Bhagat Singh, by the upcoming singer Baaz Dhaliwal, as the day also marked the Martyr’s Day (Shaheedi Diwas) of Bhagat Singh, Rajguru and Sukhdev. The event was hosted by Ammy Virk, Neeru Bajwa, Harrdy Sandhu, Mandy Takhar and B Jay Randhawa. While B Jay Randhawa gave an energetic start to the event, Ammy Virk and Harrdy Sandhu lit up the stage with their tireless performances. Queen of Pollywood, Neeru Bajwa gave an unforgettable tribute to the beautiful yesteryears actress Priti Sapru. The quartet of Ninja-Payal Rajput and Ranjit Bawa-Mandy Takhar filled the place with romance as they displayed beautiful stories of love. Singer Rajvir Jawanda also lifted the spirit of the night with his power-packed performance. Artists Harby Sangha and Jagjit Sandhu tickled the funny bones with their effervescent comic timing.
The whole film fraternity honored legendary actress Priti Sapru as she was awarded the Filmfare Lifetime Achievement Award. As for the other big award of the night, veteran actor, Guggu Gill was awarded the Filmfare Living Legend Award. Bagging the highest number of eight awards, Lahoriye was conferred the Best Film in Popular category. Lahoriye actress Sargun Mehta took the Black Lady home for the second consecutive year, while her co-star Amrinder Gill won the Best Actor Popular award. Critics’ Award for the best film of 2017 was bagged by Rabb Da Radio and the leading lady of the film, Mandy Takhar won the Critics’ Award for the Best Actress. Best Debut Awards were taken home by Channa Mereya couple Ninja and Payal Rajput, alongside Tarsem Singh Jassar.
The whole show was directed and artists were managed by Prinday, one of the leading PR and event management companies in North India. Prabhjot Kaur Mahant, the Managing Director of Prinday, said, “Filmfare Awards is in its 62nd edition in Bollywood and is the biggest and most respected film awards. Last year, it had begun its journey in Punjabi film industry and had given Prinday a chance to conceptualize and execute the event. 2nd Jio Filmfare Awards Punjabi 2018 was the second consecutive collaboration of Prinday with Filmfare and it was our honour to get this opportunity. Prinday promises Perfection and that’s what we delivered with the synergy and team effort, we are known for. I thank Team Filmfare for believing in us and giving us a free reign to make the event a success. I also applaud the zeal and endeavors of my team who worked hard to sustain the level of excellence brand Filmfare demands.”
2nd Jio Filmfare Awards Punjabi will be telecast on the broadcast partner channel MH1 soon.

‘Channa Mereya’ will give us a new definition of love