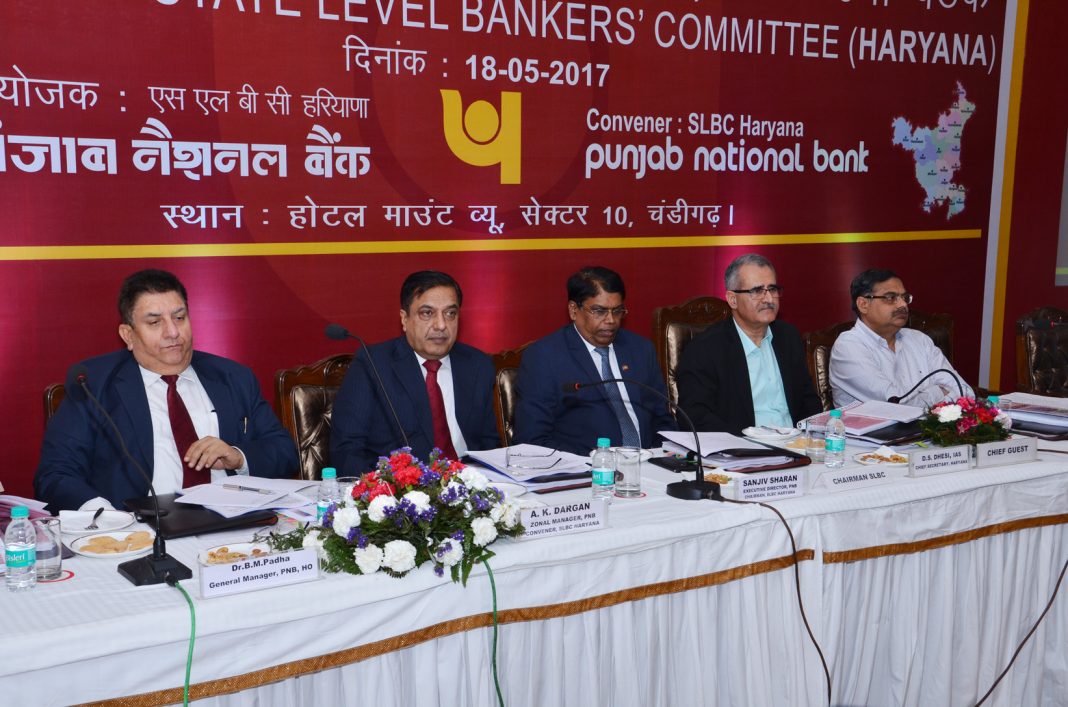 Shri Sanjiv Sharan, Executive Director, Punjab National Bank, Head Office, New Delhi in his key note address informed that since launch of Pradhan Mantri Jan-Dhan Yojana (PMJDY) on 28th August, 2014, banks have opened 6010106 accounts up to 31st MARCH, 2017 and garnered an amount of Rs.2191 crore as deposit under this scheme.  Out of total, 2754086 accounts of women have been opened which is 46% of the total accounts opened and Rupay Cards have been issued in 88% of the total accounts opened.  Shri Sanjiv Sharan called upon all the bankers to continue opening of accounts under PMJDY till the coverage of last un-banked person and issue Rupay Cards in all accounts.

While informing the house about the progress made by banks in recently launched 3 Social Security Schemes namely Pradhan Mantri Suraksha Bima Yojana (PMSBY) for accidental death insurance, Pradhan Mantri Jeevan Jyoti Bima Yojana (PMJJBY) for life insurance cover and Atal Pension Yojana (APY) for old age pension, Shri Sanjiv Sharan informed that under PMSBY the banks have enrolled 2547596 persons, under PMJJBY enrolled 812391 persons and  in Atal Pension Yojana (APY) enrolled 102991 persons upto 31st MARCH, 2017.  He called upon the bankers and the officials from respective insurance companies to accelerate their efforts to extend the benefits of the scheme to a large number of masses in the State.

While speaking on Pradhan Mantri MUDRA Yojana, Shri Sanjiv Sharan said that Pradhan Mantri MUDRA Yojana was launched to”fund the un-funded” by bringing such enterprises to the formal financial system and to extend affordable credit to them.  He informed that under MUDRA loans as on 31st MARCH, 2017 the banking system in Haryana has disbursed an amount of Rs.1886 crore against Annual Target of Rs.2935 crore and achieved 64% of annual budget in the Financial Year 2016-17 in all three categories of MUDRA i.e. Shishu loans, Kishore loans and Tarun loans.  He expressed hope that during current financial year, banks in Haryana will surpass the allocated target under MUDRA.

Shri Sanjiv Sharan, Executive Director, Punjab National Bank informed that         21 RSETIs (Rural Self Employment Training Institutes)/RUDSETIs are functioning in the state. As at MARCH, 2017, 86944trainees including 45490 women, 30570 SC/ST persons & 453 handicapped persons participated in 3153 training programmes of Skill Development at these RSETIs 14107 trainees were financed by the banks to start their enterprises.

While reviewing the performance of the banks for the review period from March, 2016 to MARCH, 2017 under various key parameters, Shri Sanjiv Sharan, Executive Director, Punjab National Bank informed that the Banking System in the State achieved all the National Goals during period under review.  He informed that the Commercial Banks and RRBs opened 205 new Branches during review period thus raising the total number of branches to 4698.  The Total Deposits of Commercial Banks/RRBs increased to Rs. 296683Crore as at MARCH, 2017 from Rs.243650 crore as at MARCH 2016 thus showing an increase of Rs.53033 Crore or 22%.

The Total Advances during the review period increased to Rs. 197107 Crore registering a growth of Rs.4962 Crore. Priority Sector Advances gone up from Rs.106467 crore to Rs. 112395 Crore recording an increase of Rs.5928 or 6% during the review period.  Priority Sector Advances to total advances in the State as at MARCH, 2017 stands at 58% as against National Goal of 40%.  Agriculture Advances increased from Rs.43422 Crore to Rs.46041 Crore exhibiting a growth of Rs.2619 Crore or 6% during the review period.  The ratio of Agriculture Advances to total advances was 24% as against National Goal of 18%.Weaker Sector advances gone up to Rs.25094 Crore as at MARCH, 2017 thereby registering a growth of 5%. Overall CD Ratio as at MARCH, 2017 for State as a whole was 66% against National Goal of 60%.

The overall achievement of banks under Annual Credit Plan 2016-17 was 81%. The achievement under Agriculture, MSME and Other Priority Sector was 75%, 116% and 63% respectively.

He laid focus on educating the borrowers about the timely repayment of bank dues. He also requested the State Govt. to help the banks in the early settlement of pending 18002 Recovery Certificates filed under HACOMP Act involving an amount of Rs. 674.07 Crore pending as at MARCH, 2017. He requested the State Govt. to take necessary steps to improve the recovery as the recovery of advances is the urgent requirement of banks for re-cycling of funds and for viable banking operations.

While addressing the house Chief Guest of the meeting, Shri D.S. Dhesi, IAS, Chief Secretary, Govt. of Haryana said that SLBC is the highest body of the State for implementing credit linked schemes. While mentioning about demonetization Shri Dhesi said that though there were some temporary problems but it has increased the liquidity position of banks for funding the credit schemes and it would have the positive impact as more and more transactions are being routed through banking channel.

Discussing about the priorities of the State Government Shri Dhesi mentioned that bank credit plays an important role for implementation of the Government schemes. He informed the house about the steps taken by Government of Haryana for doubling of farmers’ income by 2022 i.e. prepared soil health cards, diversification towards horticulture crops and grading, packing and marketing of farmers’ produce through Farmers’ Producing Organizations (FPOs). He urged upon the bankers and LDMs to implement the Pradhan Mantri Aawas Yojana (Credit Linked Subsidy scheme) & Prime Minister Employment Generation Programe (PMEGP) in letter and spirit during the current financial year from the beginning itself so that the targets could be achieved. Shri Dhesi also mentioned about  upgrading the rural infrastructure like disposal of waste water, improving water supply, veterinary centres, schools etc with the assistance of NABARD during the current financial year.

While speaking about Direct Benefit Transfer (DBT), Shri Dhesi mentioned that Aadhaar seeding and mobile seeding plays a critical role in implementing DBT. He urged upon the bankers to complete 100% Aadhaar seeding and mobile seeding in all operative saving bank accounts by 31st May, 2017. He also advised the banks to appoint the Village Level Entrepreneurs (VLEs) as Business Correspondent Agents (BCAs). He mentioned the role given to the post graduate unemployed youth under Saksham Yuva Scheme in providing financial literacy about digitalization to the rural masses. Their services would also be utilized for Jan Sewa Survey and would also be provided skill development training.